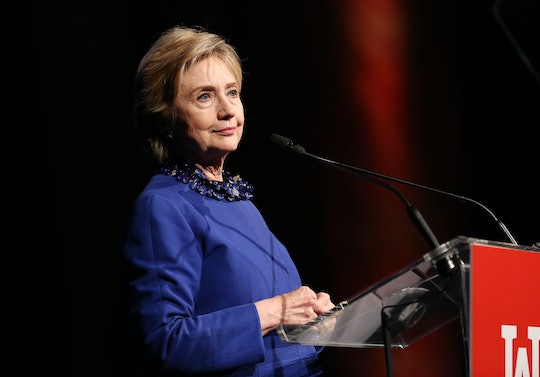 Hillary Clinton's Response To Covfefe Debacle Was Too Real

One word took over the world in less than 24 hours on Wednesday: covfefe. The made up word with confusion behind its meaning, tweeted by President Donald Trump during the early hours of Wednesday morning, gained a life of its own throughout the day. By Wednesday evening, even Hillary Clinton had something to say about it. In just one hilarious tweet, Hillary Clinton responded to the covfefe debacle and Trump's accusations that she was blaming everyone else for her 2016 election loss, instead of taking responsibility. And it summed the entire incident up quite perfectly.

What is covfefe? If you take White House Press Secretary Sean Spicer's word for it, covfefe is something that was tweeted by the president intentionally (you know, despite him deleting the tweet shortly after it was posted). "The president and a small group of people know exactly what he meant," Spicer said during a White House press briefing on Wednesday. Throughout the day, covfefe has taken on a variety of meanings as the internet has collectively tried to define and decode the word.

"People in covfefe houses shouldn't throw covfefe," Clinton said, in response to Trump's latest tweet about Clinton losing the 2016 presidential election. Clinton's tweet is a play on the phrase "people in glass houses shouldn't throw stones," which means that people shouldn't be quick to criticize others for the faults that they themselves possess. Therefore, the president shouldn't be quick to... throw covfefe at Clinton when he himself is.... made out of covfefe?

It's confusing, alright? But Clinton's response is hilarious. While the rest of us were perfecting our jokes about covfefe on Wednesday, Clinton was speaking at Recode's annual Code Conference in California where she was open about the election and her loss to Trump. "I take responsibility for every decision I make — but thats not why I lost," Clinton said, according to CNN, going on to mention the last minute email scandal (which turned out to be nothing), and the DNC's poor funding. Trump's tweet about Clinton blaming everyone but herself was in response to this quote. But the joke is, Trump isn't necessarily the first person to hold himself accountable for his actions (he likes to play the blame game, too).

Overall, Clinton was killing it with the mom jokes on Wednesday. Clinton told the crowd at the conference that she thought covfefe was "a hidden message to the Russians." As sad as it sounds, I wouldn't doubt that for a minute (just kidding... sort of). "You don't have a high enough classification to know what covfefe means," Clinton told an audience member. Given Spicer's response to the press, Clinton's jokes are close enough to the truth. At least for now.

Now that Clinton has tweeted about covfefe and perfectly addressed Trump's criticisms, I'm pretty sure there is nothing left to be said. Or maybe, there is only one thing that needs to be said, and that is covfefe. That's it. Covfefe.