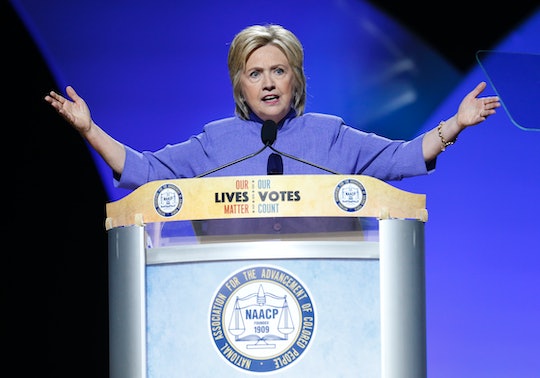 The Republican National Conventional is well underway, though it got off to a bit of a bumpy start. On Monday night, the #NeverTrump movement gasped for air while shouting for a roll-call vote. This, compounded with Melania Trump's plagiarism flub, doesn't bode well for the party altogether. Amidst all this negativity, one would suppose that Hillary Clinton's numbers would flourish. This hasn't been the case, however, as a recent NBC poll shows Clinton and Trump are nearly tied. Trump secured the Republican nomination on Tuesday night, in an instance which held the "largest number of delegates not voting for the nominee since 1976," according to the PBS News Hour broadcast. Trump's son, Donald Trump Jr., announced the delegate votes for New York that granted Trump the nomination. The final numbers showed Trump securing 1,725 delegates, former GOP presidential nominee Ted Cruz 475, and hundreds of other votes going to former nominees Marco Rubio and John Kasich. Despite the upset, Trump has somehow barreled through the Republican National Convention. If her Twitter is any indication, though, Clinton remains totally unfazed by Trump. Hillary Clinton responded to Donald Trump winning the nomination on Tuesday night with — what else? — a gif of epic proportions.

The gif, sourced from The Tonight Show with Jimmy Fallon, shows Fallon asking: "I was just wondering. Does he intimidate you, Donald Trump?" Clinton gives an immediate "no" and shakes her head, slowly smiling. In the original Tonight Show clip with Clinton, Fallon dubs Clinton's intense stare "the look," telling her: "that just intimidated me."

In commenting on the RNC's tumultuous nomination, David Brooks from The New York Times assured that many of the GOP members present are "supporting Donald Trump not because they love him, but because they love the party." Brooks indicates that, though there has been apparent dissent amongst the party, it's likely Republicans will come around to support Trump even if he wasn't their first (or second, third, or fourth) choice. If polls continue to show a tight race, Clinton's signature "look" should be accompanied by her intensity, focus, and an emphasis on what separates her from Trump: a party that has become more divided, not less, as NBC indicates the party views itself as 13 percent more united this month as opposed to last.