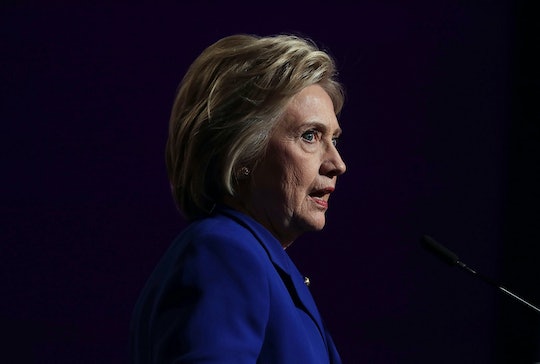 In the wake of the tragic shootings at an LGBT nightclub in Orlando last weekend, which claimed the lives of 49 people and injured 53 more, the Senate rejected a series of gun control measures that would have strengthened background checks and attempted to keep guns out of the hands of suspected terrorists. Although the decision was expected, many were mortified and let down by the vote on Monday. Critics have since taken to social media to share their outrage and respond to the blocked measures — but it was Democratic presidential candidate and former Secretary of State Hillary Clinton’s response to Senate leaders rejecting gun legislation in particular that caught everyone's attention.

“Enough,” Clinton tweeted, followed by a list of the 49 victims killed in the Orlando shooting on Sunday, June 12. It was one word and simple, but incredibly powerful (despite the fact that it was likely a carefully crafted political gesture). And it was all anyone needed to understand that the former Secretary was fed up.

First, some background: On Monday evening, the Senate rejected four gun control measures that would make it more difficult to purchase a gun. The measures had been altered after the Orlando shooting to include a five-year look-back period, which would notify the Department of Justice if someone tries to buy a gun who has been investigated for terrorist activity within the last five years. But, the large divide on the issues between Republicans and Democrats proved to be too much to pass the measures through the Senate.

In the aftermath of the deadliest mass shooting in the United States, Clinton blamed the massacre on guns, while Republican presidential candidate Donald Trump blamed immigration.

Clinton’s campaign has been very vocal and strong on their stance to enforce stricter gun laws. If elected president this fall, Clinton has said she will strengthen background checks, hold irresponsible dealers and manufactures accountable, and keep guns out of the hands of suspected terrorists as well as domestic abusers, violent criminals, and the severely mentally ill.

“I don't know how we keep seeing shooting after shooting, read about the people murdered because they went to Bible study or they went to the movies or they were just doing their job, and not finally say we’ve got to do something about this,” Clinton said last year after nine people were killed by a gunman in a Charleston, S.C. church.

Republicans and Democrats continue to disagree on what the best solution is to prevent further gun violence, but Clinton's stance has been clear from the beginning — and after her message on Monday, it's even more clear that she will remain adamant about making it more difficult for dangerous people to get their hands on dangerous weapons.