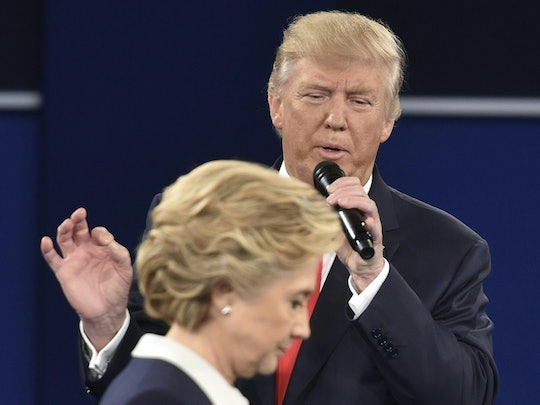 The second presidential debate at Washington University In St. Louis, Missouri was positioned to be the most contentious yet, with many viewers eager to hear how Republican presidential candidate Donald Trump would either defend, discuss, or apologize for the leaked comments he made describing and laughing about "grabbing" women "by the p*ssy" during a leaked 2005 Access Hollywood interview. However, it wasn't Trump who ended up spending the majority of his time apologizing. Democratic presidential nominee Hillary Clinton spent the debate forced to apologize while Trump refused, and every woman watching the second debate knows exactly what that feels like.

In so many ways, this presidential election feels like the bad dream every woman lives on a daily basis and yearns to wake up from (if only for a moment). In what world can a man say, “Grab them by the p*ssy. You can do anything," when discussing women, his fame, his failed attempts at sleeping with a married woman, yet continue to run for president? In what world can a man not only brag about behaviors akin to sexual assault, but dismiss sexual assault as "locker-room banter"? Unfortunately, this world. Unfortunately, the same world that perpetuates rape culture. Unfortunately, the same world that leaves one out of every five women victims of attempted rape or rape, and the same world that perceives sexual harassment as "compliments." And Sunday night's debate perfectly illustrated the world that would continue to be every woman's unescapable reality, if Donald Trump is elected president.

In the span of 90 minutes, Clinton apologized for her emails (again), for calling half of Trump's supporters as "basket of deplorables" (again), and even for interrupting Trump during the debate (which is astounding, considering Trump interrupted Clinton a reported 40 times during the first presidential debate). Even though the man she was debating described his conduct with women he perceives to be beautiful as, "a magnet. Just kiss. I don’t even wait," it was the woman who has devoted more than 35 years of her life to public service who spent most of her time on Sunday night apologizing and saying "sorry" as a away to rectify her befuddles.

When Trump had a chance to apologize for his Access Hollywood comments, he deflected, and pointed to the women in the audience who have accused Bill Clinton of sexual assault while simultaneously accusing Hillary Clinton of hurting her husband's accusers. Trump's sidestep wasn't a surprise, of course, as he held a pre-debate press conference with Paula Jones, Juanita Broaddrick, Kathleen Willey, and Kathy Shelton. Jones, Broaddrick, and Willey have all accused former President Clinton of sexual assault, and Shelton was a the victim of a rape case Hillary Clinton was appointed as public defender on 1975.

Of course, Trump's deflection didn't come before he, again, equated his words to "locker room banter" and evoked the age-old "boys will be boys" rhetoric that fuels rape culture. While watching the debate, I was transported back to a cold hospital room four years ago, back to the morning after I was sexually assaulted by a coworker. I found myself apologizing for the actions of someone else. I told the reporting detective I was "sorry" for how much I was drinking and that I was "sorry" for wearing a spaghetti strap tank top instead of a sweater and that I was "sorry" for waiting until the morning to go the hospital.

Tonight, Donald Trump refused to apologize for disgusting, disturbing comments he made about women. Yet we have no problem demanding a woman as qualified as Hillary Clinton apologize for being the best possible candidate for the presidency of the United States.

As a woman, I was transported back to every moment in my life where I've had to apologize for another man's actions. I'm constantly sorry that I am perceived, by some, to be "attractive" and I'm sorry that I take up space and that I'm human and that I evoke emotions others don't have control over. I'm sorry even when walking down the sidewalk leaves someone else "powerless," so much so that when they catcall and scream obscenities in the name of "compliments," I apologize to them for their behaviors.

As a human being, I was disheartened and exhausted watching the debate because so many women have spent the last three days since the leaked Access Hollywood interview attempting to describe and teach consent to individuals who don't seem to understand it. In doing so, women have once again been asked to apologize for their own sexuality. We're sorry that you're attracted to us. We're sorry that our dresses show leg. We're sorry; we're sorry; we're sorry. Scott Baio, an avid and public Trump supporter, told women to "grow up" and claimed the same language Trump used in the Access Hollywood tape is language women use "over white wine when you have your brunches."

Watching Clinton on stage tonight, I was reminded of all the times women are asked to apologize for things beyond our control. I was reminded that we're asked to apologize for our existence, and taught to be sorry when we're smarter, stronger, more intelligent, or better suited for a role. We're taught to be sorry when we did it, yes, but even when we didn't do it, and even when we don't even know who did it. We are guilty by association. And when you're a woman, you're always associated.

Like Clinton during the debate, women around the world are forced to apologize for not only their actions, but the actions of the men who come in and out of their lives. It's infuriating. It's exhausting. It has to end. And tonight, Donald Trump refused to apologize for disgusting, disturbing comments he made about women. Yet we have no problem demanding a woman as qualified as Hillary Clinton apologize for being the best possible candidate for the presidency of the United States.