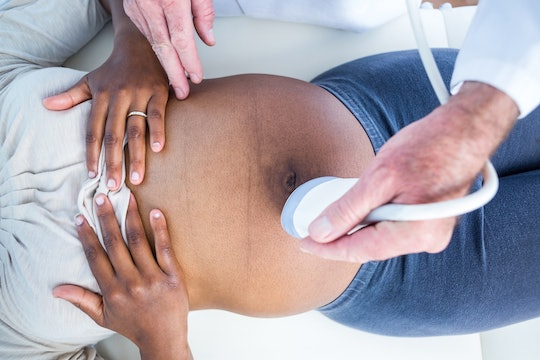 Despite Myths, HIV Treatments Are Safe To Use During Pregnancy, Study Confirms

The after-effects of the HIV epidemic continue to have repercussions today, especially for those who are HIV-positive and pregnant. There have been concerns in the past about whether the baby can be protected from infection and if treatment medications are safe to use during pregnancy. But there is now confirmation that HIV treatments are safe to use during pregnancy, thanks to this study.

Researchers found there is no difference in risk of preterm birth and early infant death between the three antiretroviral regimens taken by pregnant women with HIV. According to Contagion Live, experts were aware that some medications pass from pregnant mother to child through the placenta, which means the baby is protected from infection. Most of those medications were found safe to use during pregnancy, but a past study, known as the PROMISE trial, raised concerns around one triple-drug regimen: tenofovir, emtricitabine, and ritonavir-boosted lopinavir (TDF-FTC-LPV/r).

The PROMISE trial refers to a study conducted by the United States National Institute of Allergy and Infectious Diseases, according to the World Health Organization. PROMISE stands for Promoting Maternal-Infant Survival Everywhere, and the study was published in November 2014. The World Health Organization reports, "The PROMISE study aims to determine how best to safely reduce the risk of HIV transmission from infected pregnant women to their babies during pregnancy and after delivery and assure the benefits of antiretroviral therapy for the health of the mother."

The PROMISE trial found that the previously mentioned drug combination, TDF-FTC-LPV/r, was less safe than other combinations offered. The World Health Organization reported the study found there were fewer infant deaths within the first 14 days after birth with other drug regimens versus TDF-FTC-LPV/r.

It's because of the PROMISE trial, and the questions that remained, that researchers dove back into the topic. Kunjal Patel, senior author of the study and a senior research scientist in the Center for Biostatistics in Aids Research, told Contagion:

The PROMISE trial left open questions as to whether their results can be replicated in other cohorts of HIV-infected pregnant women such as those in the United States and whether the increased risk of severe adverse pregnancy outcomes observed with the TDF-based regimen in PROMISE held for TDF-based regimens with other protease inhibitors such as atazanavir.

Researchers did find that the third group of women, treated with TDF, emtricitabine, and atazanavair/ritonavir, actually had a 10 percent lower risk of premature birth and other complications compared to those who didn't receive TDF at all, according to WebMD. This holds up; WebMD reported that the World Health organizations recommends all adults that are HIV-positive receive a drug regimen with TDF.

In the last 30 years, a lot has changed in how the greater public understands HIV/AIDs. The first cases of what would later become known as AIDs were reported in the United States in June 1981, as noted in a CDC HIV Surveillance Report. It had a disproportionate impact on the LGBT community, along with racial minorities as a whole. Because of this, not much was originally done to understand the infection or even work towards a cure, and mass death became routine in these communities.

A 2016 Bright Magazine article reported that, over the last five years, 20 times more Black women in the U.S. were diagnosed with HIV/AIDs than white women. Part of why this study is so important is because it has the potential to positively impact women who have been continuously disenfranchised from conversations around HIV/AIDs.

A big part of being able to appropriately respond to diseases is de-stigmatizing them. Hopefully, education around HIV/AIDs will continue, and studies like this will be able to assist those who are directly affected.