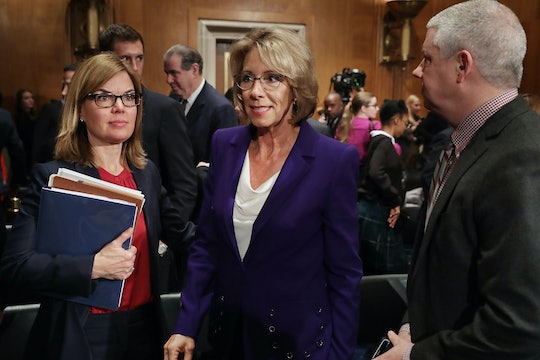 People are not very happy about President Trump's pick to take over the Department of Education — Betsy DeVos — and no one is less thrilled about her than the Democrats who are going to stage a protest ahead of the vote on her nomination. On social media Monday night, a wave of #HoldTheFloor tweets proved that people were supportive of this resistance coming from the other side of the aisle. In the wake of DeVos' hearings, American citizens have reportedly been flooding their legislators' phone lines to ask them to cast their vote against her appointment. It's going to be a super close vote and in the case of a tie, Vice President Mike Pence will be the tie-breaker (and we all know who he'll vote for).

Democrats are planning to hold the floor for 24 hours to stave off the vote. It's not a filibuster, which is designed to block a vote, and really more of a way to rally people to call their legislators and let them know that the don't want DeVos to be in charge of Americans' education.

As expected, many on social media were more than happy to do their part as well, adding their voices to the argument against DeVos under the hashtag #HoldTheFloor:

Some Just Generally Supported The Protest

Others Were Having A Good Time

Democrats, and American voters, are bothered by DeVos for a few reasons, not the least of which are her alleged 102 conflicts of interest. She's also not exactly an advocate for public schools, which is major issue for Democrats. DeVos also thinks that guns should be allowed in schools, in case of danger, and it's noteworthy that the last time the Democrats staged a protest was this summer, when they held a sit-in to fight for gun control reform.

Under DeVos' possible leadership, the Department of Education would be greatly changed, but Republicans aren't convinced that Democrats are protesting for the right reasons. Senate Majority Leader Mitch McConnell said Monday, "It seems this gridlock and opposition has far less to do with the nominees actually before us than the man who nominated them. Enough is enough."

But that's not really true — so far, the Senate has confirmed a number of Trump's picks, even though they were also, in some ways, just as controversial as DeVos. Senate Democrats, and everyone watching at home on Twitter, just really don't feel that DeVos is qualified for the job. But whether Democrats can convince their Republican colleagues to see it their way by holding the floor remains to be seen. If the reaction on social media is any indication, Republicans might want to start listening to their constituents.