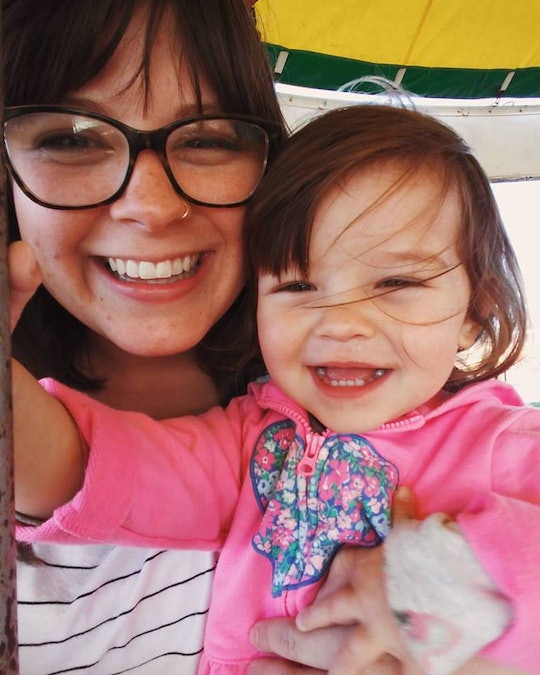 Honestly, I Don't Care If Other Moms Talk About Me

It used to really bother me, but I've honestly gotten used to overhearing other women with kids talk about me at the park and judge my laid-back approach to parenting. When I first started taking my first born to play, she was barely walking, needing my assistance to get up the stairs, riding on my lap down the slide. With time, she grew more capable and it felt natural to back away and watch her play independently. I really enjoyed seeing her test her new skills, challenging herself by climbing a new structure, or braving a slide alone. Sometimes she struggled for a long time before she conquered a new challenge, but I felt confident that she could master each new thing on her own if I was patient enough to stay back and let her play. Eventually, I moved from my spot standing near her while she played and started finding a comfortable spot on a bench, giving her the freedom to explore that park independently while I glanced up from my book every sentences.

Now that I have two children, my routine is the same. My youngest is incredibly brave and has gained a lot of independence by mastering new things at the park quicker than her bigger sister did at her age. She loves that I let her play freely, and honestly, I also enjoy the freedom to sit on my spot on the bench. I've always known my hands-off approach was different, I mean, it's hard not to notice that you are the only parent at the park reading a book instead of hovering near the equipment or waiting at the end of the slide. What I didn’t know was that my choice to let my toddlers play freely wasn’t just unpopular, it was frowned upon. It took overhearing other women gossip about me to understand just how most parents felt about my parenting approach.

It wasn’t even 60 seconds before I heard from the other side of the playground, “If her mom won’t help her, I will!” and watched a mom march over to assist my daughter up the slide, shooting me a glare at the same time.

For instance, on one occasion I watched my younger daughter struggle up the steps of a slide at an indoor playground. It was one of those play areas where there was plush flooring everywhere. I mean, the floor was so soft my kids bounced a little while they ran. There was literally no way she could injure herself and I knew just how thrilled she'd be if she figured out how to climb it herself. So I stayed back. I watched her work hard at her new task, deciding I would intervene if she grew too frustrated, and it wasn’t even 60 seconds before I heard from the other side of the playground, “If her mom won’t help her, I will!” and watched a mom march over to assist my daughter up the slide, shooting me a glare at the same time.

And that wasn’t the only occurrence. Last week, I sat at the zoo and ate a sandwich (because, I'm 39 weeks pregnant and SO hungry) and watched my kids play. It was a really quiet day and my kids were climbing up the slide. I didn’t say anything because they weren’t getting in anyone's way and I think it’s kind of a stupid rule anyway. (Hey, just being honest.) Once again, it wasn’t long before I heard it: “Well, honey, some moms don’t make their kids obey the rules.” I found myself wondering what rules she was talking about. It wasn’t like there was a sign posted that stated, “Please, do not climb up the slide.” It was some unspoken rule, apparently, and I was letting my kids break it.

I am re-telling all of this to make a point: I choose to parent a certain way.

That same weekend, I was at the receiving end of glares because, when my daughters asked me to push them on the swings, I encouraged them to find something else to do. I rarely tell them no to that request, but at 39 weeks pregnant it’s my prerogative.

I am re-telling all of this to make a point: I choose to parent a certain way. I access my kids’ safety at the park, and if the risk is low, I let them play independently. It’s really not that big of a deal to me, but a lot of parents feel differently and decide to voice their opinions about it. At first I was confused by this, since I am not putting my kids’ lives in danger, but I recently read a study that cleared it all up. According to a recent article published by NPR, new research is explaining why parents get so freaked out about completely safe situations they perceive as unsafe.

“It's not that risks to children have increased, provoking an increase in moral outrage when children are left unattended,” author Lombrozo explains, “Instead, it could be that moral attitudes toward parenting have changed, such that leaving children unsupervised is now judged morally wrong. And because it's judged morally wrong, people overestimate the risk.”

The author goes on to interview two researchers on this topic, who offer a really compelling argument that parents today are way overestimating the danger of a lot of situations. So when they watch a parent do something they don’t approve of, they kind of elevate the danger of the situation when the real problem is that they believe moral parents don’t sit nearby reading a book while their kids struggle on the playground (or leave their kids at home alone, or let them play outside unsupervised).

Knowing this, I can move forward with my approach to park parenting and let my kids have the freedom they want to play independently. I now understand why other moms gossip about me at the park, but I don’t really care. Honestly, I know my kids are safe and I know they are smart and capable kids, so I give them the freedom they want to climb tall things and race down slides. If that means I have to ignore a whisper or two or smile back when I am at the receiving end of some glares, so be it.