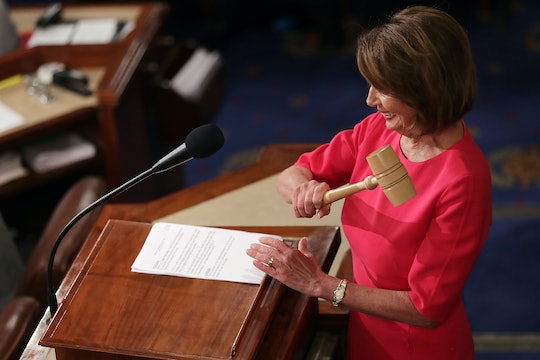 Speaker Nancy Pelosi became the Speaker of the United States House of Representatives less than a week ago — and she is already using her new position to introduce a very important bill. This week, Pelosi and other House lawmakers will reportedly introduce legislation for gun background checks.

As Politico reported, Pelosi, Rep. Mike Thompson (also a Democrat), and former Rep. Gabby Giffords will announce the bill — and more details about it, presumably — on Tuesday, Jan. 8, which is the eighth anniversary of the day Giffords was shot. In 2011, a gunman opened fire outside a Tuscon, Arizona supermarket. The gunman shot Giffords, and she was among the injured that day. Six people were killed during the shooting, The New York Times reported at the time. Even though Giffords is no longer in office, she is still an active supporter of gun safety laws.

The bill is called "H.R. 8," as The Hill reported. This is a reference to Giffords, who represented Arizona's 8th congressional district as a member of the House of Representatives. Should the legislation pass (and get signed by President Trump), it would require a federal background check for every gun sale in the United States. The law would still apply to official private transactions, though it would not apply to more casual private transactions, such as giving a gun to a family member, or to temporarily lending someone a gun while hunting, The Hill added.

Giffords announced the bill on Twitter this weekend. "I’m thrilled to join @SpeakerPelosi and @RepThompson next week in Washington to introduce a bipartisan universal background checks bill," she tweeted. "Americans have spoken. It’s time to address our gun violence epidemic, and this new Congress will not sit silent."

Thompson also tweeted an early announcement of the legislation this weekend. "On Tuesday I will introduce my bipartisan bill to expand background checks, taking decisive action to help prevent gun violence and keep our communities safe," he wrote on Twitter.

As Giffords and Thompson mentioned, the bill is going to be bipartisan. Rep. Peter T. King of New York will reportedly serve as the "lead Republican co-sponsor," the Washington Post reported. Even though many Republicans have anti-gun safety stances (sometimes as a result of accepting funding from the National Rifle Association, aka the NRA), King has a strong history of working with Democrats on proposing background check laws. For example, in November 2017, King and Thompson introduced the Public Safety and Second Amendment Rights Protection Act of 2017, as explained on Thompson's website. The bill was similar to the one being introduced this week, and Thompson ultimately filed a motion to discharge in 2018, but the petition didn't receive enough signatures to continue, according to the official Congress website.

During her swearing-in speech as the Speaker of the House last week, Pelosi touched on the importance of bipartisan support across the nation, especially regarding the issue of gun safety. As seen in a video shared to Twitter of her speech, she said:

We will make our communities safer, and keep our sacred promise to the victims, the survivors, and families of gun violence by passing common-sense, bipartisan, background check legislation.