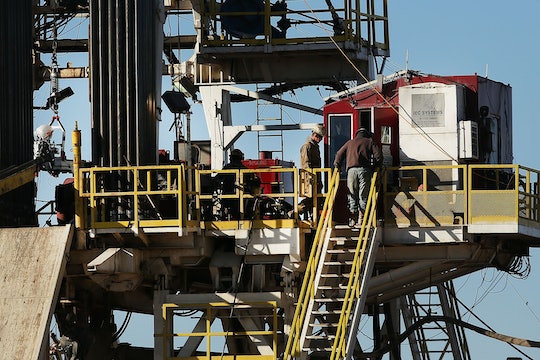 How Bad Was The Oklahoma Earthquake? It Caused Some Damage

On Saturday, many in the midwest woke up to a trembling house, due to an earthquake in Oklahoma. There was been some damage, but it's still too early to know how bad the Oklahoma earthquake really was. But it was the biggest one the area has measured since 2011, according to the United States Geological Survey. The quake hit north-central Oklahoma at 7:02 a.m. and was of a 5.6 magnitude. For comparison's sake, the recent quake in Amatrice, Italy, which did some major damage to the small hill town was a 6.2 magnitude. So Oklahoma's quake was pretty forceful, although they're still assessing the total damage. There were no injuries.

The quake was centered around Pawnee, Oklahoma, but there were reports of tremors in Kansas City and St. Louis, Missouri, Fayetteville, Arkansas, Des Moines, Iowa, Norman, Oklahoma, and all the way down to Dallas. Pawnee County Emergency Management Director Mark Randell said no buildings collapsed in the town, just a few miles from the epicenter, and that there were no injuries. "We've got buildings cracked," Randell told The Associated Press. "Most of it's brick and mortar, old buildings from the early 1900s."

Earthquakes in the area are becoming all the more common and many scientists believe that the cause is manmade. The disposal of wastewater from oil and natural gas companies, or what's known as "fracking," seems to be the culprit. Saturday's earthquake was similar in magnitude to one in November 2011, but Oklahoma is reporting about 2 smaller earthquakes every day, according to Reuters. In 2015, there were 890 quakes of 3.0 magnitude or higher.

It's getting serious. The area where Saturday's quake hit is on the edge of an area under an "regional earthquake response plan" issued in March by the Oklahoma Corporation Commission, which regulates the oil industry. That plan is meant to decrease the amount of wastewater disposed into the earth by 40 percent from 2014 levels and thus decrease the amount of quakes.

But Oklahoma is way behind on preventing earthquakes, since initially officials and fracking advocates ignored calls to decrease the amount of wastewater and instead focused on how deep the wastewater went into the ground. Neighboring Kansas had the same problem but moved fast when it came to limiting the volume, instead of the levels, of wastewater that was released underground. Because of that move, Kansas' instances of quakes has decreased by 60 percent.

According to geologists, any quake below a 4.0 magnitude won't result in damage — like highways or bridges crumbling, but the earthquakes in Oklahoma are getting stronger and recurring more often. With Saturday's 5.6 magnitude quake, everyone was lucky they only sustained some "minor damage," but it's not easy to predict what the next one will bring.