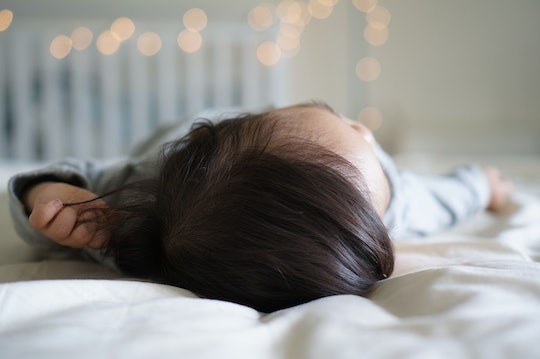 How Cry It Out Affects You, The Mom, Later In Life, Because No One Ever Talks About That

Although sleep training is meant to help your baby sleep better at night, babies aren't the only ones affected by the practice, regardless of which method you try. Usually, sleep training methods are reflections of parenting styles, and parents who choose to let their baby "cry it out" (CIO) are impacted by the method as well (and not just in being better rested). Wondering how cry it out affects you, the mom, later in life is a question that most parents don't ask when choosing a sleep training method, but it's interesting to consider and might make the decision easier.

Of course, sleep training is ultimately about your baby. Methods involving tears are notoriously tough on parents, despite evidence suggesting that short intervals of crying it out isn't harmful at all to the babies, as noted by Forbes. However, certain sleep training methods may build a parent's confidence, strengthen their bond with their child, and reinforce the importance of routine. But before digging into how it may or may not affect parents in the long run, defining what "cry it out" exactly means (and what it doesn't mean) is important.

Although most associate the term with simply leaving your baby in a dimly lit room alone to cry for hours, there are many variations of CIO, most of which don't (and shouldn't) involve complete extinction. CIO can be done gently and should never involve a small baby crying for long periods of time. According to Baby Center, the amounts of crying and comforting will vary from parent to parent, but almost every method involves "graduated extinction" of some kind, except co-sleeping and methods when parents hold their babies to sleep.

For example, some parents may wait five minutes before going in to comfort their baby, while others may stay in the room with their baby while they fuss, gradually getting closer to the door until they're out of the room when baby falls asleep. Each method will likely involve a few tears until baby realizes that their parent will come to comfort them and that falling asleep on their own is possible. Whatever variation you choose, know that there isn't necessarily a black and white approach to CIO methods, and following your instincts will usually serve you well.

Now, onto how it may affect parents for the better. According to The New York Times, graduated extinction sleep training methods have been proven to help babies sleep for longer periods of time more quickly than other "gentle" approaches and therefore, lead to more well-rested parents. Sleep deprivation in the early months of parenthood is real and normal, but parents shouldn't be expected to endure months of surviving on scant amounts of sleep out of fear of (or guilt over) sleep training their baby. In fact, doing so may be more dangerous for a parent's health than they realize.

A piece from La Leche League International (LLLI) noted that despite any qualms with letting baby cry, mothers whose babies wake persistently at night are more prone to depression. In fact, the Sleep Foundation noted that the link between sleeplessness and depression is well established and can affect parents as easily as it can affect anyone else. A rested parent is an attentive parent, and CIO definitely results in better rested babies and parents.

Although other sleep training methods may involve better sleep for babies, they don't always lead to a good night's sleep for the parents. Co-sleeping or bed sharing just isn't practical for everyone, especially for parents who don't sleep well with their child in bed with them. For these parents, the long term benefits of a CIO approach might outweigh the temporary discomfort of letting their baby cry for short amounts of time. As the aforementioned piece from The New York Times noted, sleep training shouldn't make parents feel guilty. Your mental well being is just as valuable as your baby getting a good night of sleep.