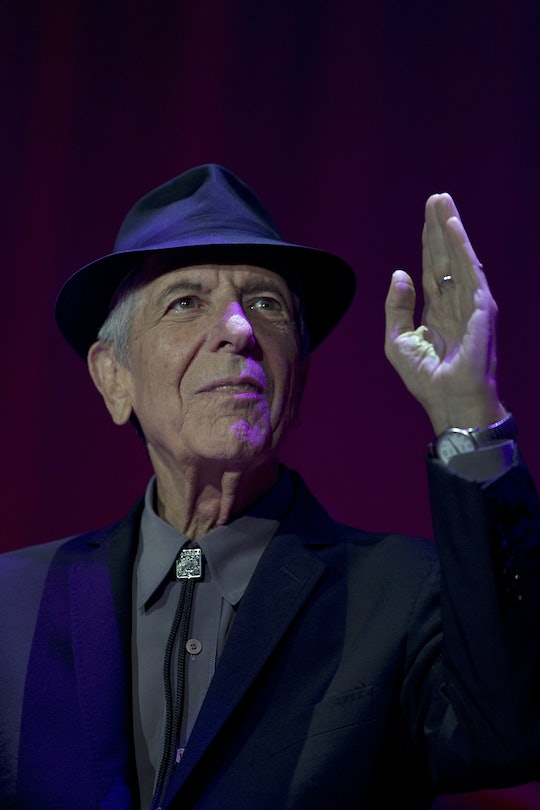 How Did Leonard Cohen Die? The Music Legend Won't Be Forgotten

The music industry lost a legend on Thursday with the death of Leonard Cohen, the man behind "Hallelujah." The artist was beloved in the industry, playing a huge role in for many, many decades. His death comes may be a shock to some, leading those to wonder how Leonard Cohen died. The musical legend will be missed by many, and his death leaves an empty space in the music industry's heart.

The death of Cohen was announced on the artist's Facebook page. The statement read:

It is with profound sorrow we report that legendary poet, songwriter and artist, Leonard Cohen has passed away.We have lost one of music’s most revered and prolific visionaries. A memorial will take place in Los Angeles at a later date. The family requests privacy during their time of grief.

Noticeably, there is not a reason stated as to how the legend, also known for his writing, died. But, Cohen recently spoke to the New Yorker in October of 2016 and said he had very poor health, even going as far to say, "I am ready to die. I hope it’s not too uncomfortable. That’s about it for me," when initially prompted about finishing songs that were not complete.

The singer and writer has been apart of the scene for over 50 years. Besides "Hallelujah," which I think every TV show has used, in some capacity, the musician has captivated audiences with songs like "Suzanne", "Dance Me to the End", "Everybody Knows", and "Bird on the Wire." Along with his music, he was also a poet and novelist. He won awards for his writing, including Let Us Compare Mythologies, which was published in the 1950s.

Fans, both famous and not, are mourning the loss of the legend tonight — and no doubt for time to come. Simply looking on social media platforms like Twitter prove just how much he will be missed. Lin-Manuel Miranda, of Hamilton, tweeted a particularly impactful quote by Cohen.

The quote is from Cohen's song "Suzanne", and seems to fit perfectly for the sad occasion. While it is tragic to lose someone who has made such an impact on many sectors of the entertainment industry, we know that we can continue to share his talent for years to come, which is,in a way, freeing.