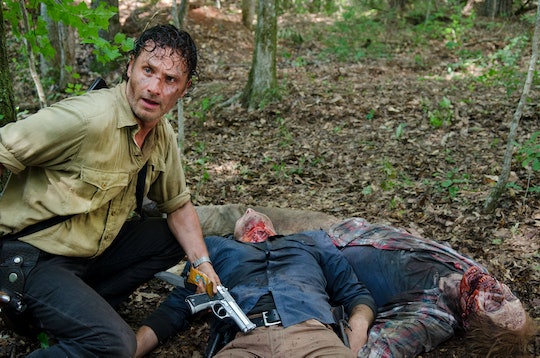 How Did Rick Get Home On 'The Walking Dead'? Here Are 3 Possible Theories Of His RV Escape

For weeks, fans of The Walking Dead have been asking the same question over and over — is Glenn dead or alive? And although that still remains a mystery, this week brought about a new question (or, at least, it did for this viewer.) As I watched Sunday's episode, I wondered how Rick escaped the RV and returned to Alexandria.

In case you need a reminder, the third episode ended with Rick frantically trying to start his rundown RV as a group of zombies approach. If you don't remember this, I won't fault you too much. After all, you were probably too distraught by Glenn's fall into the zombie mosh pit to pay attention to anything else. But it did happen. Which makes this week's opening scene all there interesting.

Flash forward two episodes later (which, I estimate to be a day later, as most) and Rick is running towards the Alexandria gates, tackling zombies and screaming for someone to let him in. He looks tired, yes, but relatively unharmed given the fact that he probably had to fight off a few dozen zombies to make it back home.

So how did he do it? How did Rick go from being in the fight for his life to a slightly stressful zombie-filled run home? One can hope that the plot point will be revealed at a later date, or that Scott M. Gimple will share some insight. But until either of those take place, here are three possible ways Rick escaped from the RV and made it back to Alexandria.