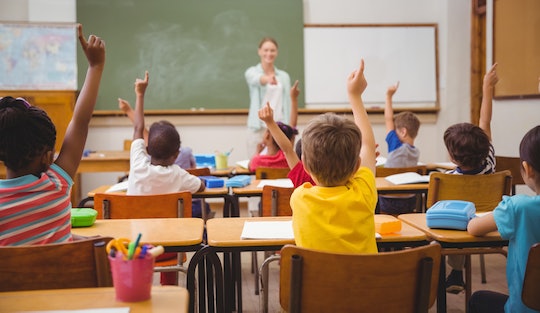 On the long list of those affected by the recent government shutdown, federally funded programs are sometimes hit the hardest. Fortunately, mandatory federal programs like Medicaid won't be hurt by the freeze. But how did the government shutdown affect Head Start? Those grantees that receive their funds on the first of the month would have been in trouble if the shutdown lasted into February, but as President Donald Trump is temporarily re-opening the government, Head Start is in the clear for now.

When determining how a government shutdown will impact one program in particular, such as Head Start, the first step is figuring out if its funding is mandatory or discretionary. Bad news there: Head Start runs on discretionary funds, according to Vox. But fortunately, a lot of discretionary funded programs were safe during the shutdown thanks to measures providing a full year of funding in the event of a shutdown.

It gets a bit more complicated from there, though, because not all Head Start programs receive funding at the same time. While all Head Starts receive their funds annually, a portion of the nation's 1,600 grantees do not get their money on a calendar year or fiscal-year cycle, according to Ed Week; Instead, these are funded the first of every month. Robin Winchell, the public affairs director for the National Head Start Association, told Ed Week that those grantees expecting funding on Feb. 1 would have be hit if the shutdown continued until then.

The 2013 government shutdown was a whole different story, though. It affected nearly two dozen Head Start grantees in six states that were expecting to receive funding on Oct. 1, according to Governing. In that case, Houston-based philanthropists John and Laura Arnold stepped in as "Angel Investors" to keep the affected centers open and serve the 6,3000 low-income kids dependent on them with a $10 million interest-free loan, according to The New York Times.

Trump's move to reopen the government after 36 days likely comes as a relief to the grantees at risk during the latest shutdown. Despite the uncertainty and turmoil in Washington, that's exactly where leaders of the Head Start community, both parents and staff, are spending the weekend planning out the the program's coming year at the National Head Start Association’s Winter Leadership Institute.

Before beginning the strategy meetings, networking, informative session, and panels that will makeup the bulk of the weekend, NHSA Executive Director Yasmina Vinci told the attendees that the government shutdown wasn't far from their minds:

Throughout history, uncertainty has created opportunity, and we will continue to find opportunities to make Head Start stronger in Washington and in every community across the nation. The federal government has closed down, but the aim of our work will not change. In fact, now it is more important than ever to make our voices heard on Capitol Hill, and we will be meeting as planned with our members of Congress and whatever staff is in their office this week.

With the government reopening on Jan. 25 and the Head Start grantees saved from the risk of a Feb. 1 loss of funds, Vinci and the other attendees are free to focus on more important matters, like making lasting changes and bettering the lives of thousands of children across the country. Hopefully those responsible for the shutdown will keep in mind the important work that their shutdown hindered and keep the interests of the people in mind going forward.