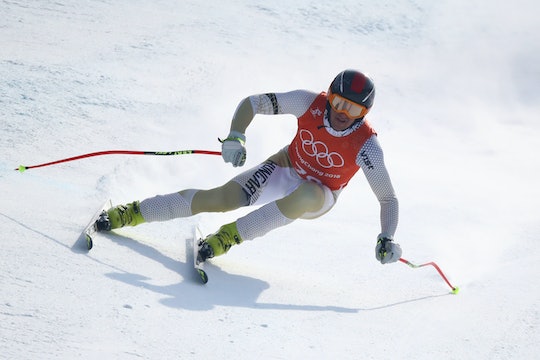 I don't usually care all that much about sports, but this year's Olympics in PyeongChang have got me paying attention to all sorts of sports that aren't usually on my radar. I even attended college in an area that's really big on skiing and other snow-related sports, but never once strapped on a pair of skis. Yet here I am, anxiously watching as downhill skiers fly down mountains of snow at breakneck pace. But just how fast do downhill skiers go, anyway? The answer is basically really freaking fast, OK?

Listen, I can't even walk on snow for all that long without falling down, and I grew up in one of the snowiest regions in the country. And these athletes are putting on skis and just casually making their way down a mountain of icy peril, facing possible injury or death, like it's no big deal.

If you've ever watched a downhill skier make their way through a course, during the Olympics or at other events, you may have wondered just how fast they're really going. My basic sense is that it's super fast, but according to Sports Illustrated, Olympic downhill skiers "eclipse speeds of 80 to 95 mph," and wow, yes, that's super fast all right.

And those numbers aren't all-time records or anything. Olympic skiers usually fall in the 80 mph range, with some going 95 mph on the fastest sections of their race, according to CBS Sports. Speeds during downhill ski racing with turns usually average around 40 to 50 mph, Trails.com reported. But those aren't the sort of numbers Olympians usually clock in.

Austrain athlete Klaus Kroell holds the record for top recorded speed during a downhill competition at 96.6 mph, according to NPR and David Currier, a former Olympic downhiller who spoke with the outlet in 2006, when Kroell achieved that record in January. He didn't even win his race — he finished 19th.

These awe-inspiring speeds are tracked by a radar gun stationed at the fastest section of the downhill run, NPR reported. Currier said there's one stretch on almost every course where racers get to 85 mph or more. But of course, winning is not all about speed, but strategy, which is how someone who went as fast as Kroell might not actually win a downhill competition.

To put those numbers into perspective, cheetahs can hit speeds of about 64 mph, according to Fast Company. And they're generally considered one of the fastest land animals on Earth. Of course, they're at a disadvantage next to skiiers, because we aren't putting cheetahs on speed-enhancing skis, since that would be awful and terrifying. But most of these skiing Olympians could pass one during a downhill course if there was ever reason for a cheetah to be sprinting nearby.

And I'm not joking about the possible injury and death thing, either. Just a few months ago, French skier David Poisson, a top performer at the World Cup for years and the bronze medalist in downhill skiing at the 2013 world championships, died after he stumbled during a training run and hit a tree, according to The New York Times.

So how do professional skiers deal with the possibility of severe injury or death in the course of making their way down the hill at lightning speeds? Simple — they just don't really talk about it. Bryce Bennett, one of the American downhillers participating in the Winter Games in PyeongChang, told The New York Times:

More often than not, we won’t talk about the dangers. Because it doesn’t help. If you talk too much about it, it just becomes more of a reality.

Several athletes told the publication Poisson's death shook them, but they got back out there and they just kept competing anyway.

So if you find yourself watching downhill skiing during the 2018 Winter Olympics, just keep in mind how fast these athletes are really going while you sit and watch from the comfort of your couch. It's truly remarkable what these skiers can do, at speeds the rest of us have rarely, if ever, experienced.