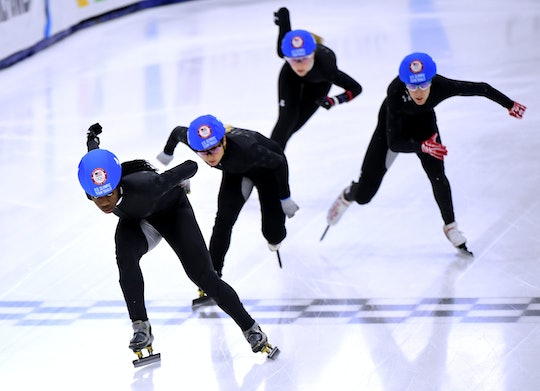 How Fast Do Olympic Speed Skaters Go? They Don't Call It *Speed* Skating For Nothing

So many events at the Winter Olympics are thrilling to watch. And if you have a ~need for speed~, you've probably tuned into speed skating once or twice since the Olympics kicked off in PyeongChang, South Korea last week. Olympic speed skaters appear to move across the TV screen so quickly. Matches seem to be over in seconds before viewers even have a chance to settle in. (Hey, they don't call it speed skating for nothing.) The sport is pretty amazing to watch, but many fans are probably wondering: exactly how fast do Olympic speed skaters go?

18-year-old Maame Biney is competing as a short track speed skater at the Winter Olympics for the first time this year. Biney recently opened up about how she is able to go so fast in a video for CNN. She explained:

During those starts, you have to put your hips forward and go low. When the judge says go, you have to just basically run on the ice. Sometimes it goes by so fast that I don't even know what's happening. So in order to go around the corners to pivot — which is touching your hand on the ice — you have to lean a lot and get a lot of pressure. That's one of the things that makes you go super fast on the corners and whip around ... My fastest time to go one full lap which is 111 meters is 8.6 seconds, which is around 30 to 35 miles an hour. So... whoo! That's really fast.

There are five different lengths that long track speed skaters race on: 500 meters, 1,000 meters, 1,500 meters, 3,000 meters, and 5,000 meters, according to the PyeongChang games' website. These races are all performed on a 400-meter track (that the competitors make laps around).

The high-speed sport doesn't come without danger. Several speed skaters compete at the same time, all trying to get a good position on the track, meaning there's a high possibility of collision. They're all wearing super sharp blades, that are about 46 centimeters (1.5 feet) in length and just 1 millimeter thick, according to the official Olympics website. Because the sport is so dangerous, most speed skaters take precautions to protect their bodies, which includes wearing helmets, goggles, knee guards, shin guards, neck guards, a cut resistant suit, and cut resistant gloves. Hey, where can I get a pair of those for the next time I have to cut up an avocado?