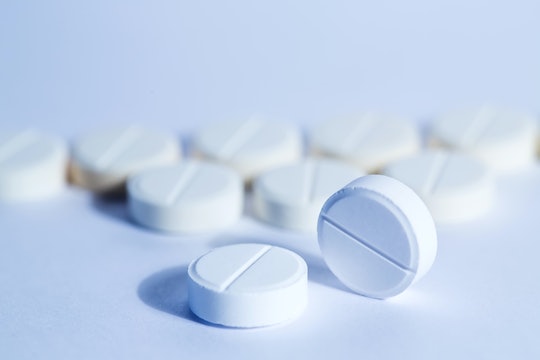 How Fast Do You Get Pregnant With Clomid?

So you've been trying to conceive (TTC) for a while now, and your doctor has mentioned a big word in terms of fertility — Clomid. It's a drug that's been talked about plenty among those battling infertility and trying to get pregnant, but you probably still have some questions. Like, how fast do you get pregnant with Clomid? Is it worth it?

Dr. Prati Sharma, reproductive endocrinologist and infertility specialist at CReATe and founder of The Conception Diaries blog, says in an email interview with Romper, “Pregnancy rates per cycle of Clomid are 10 to 15 percent. Pairing Clomid with IUI (intrauterine insemination) increases the chances by about 5 percent. Success rates vary with the age of the patient and causes of infertility, but younger patients do better. A patient may need up to six cycles of Clomid before pregnancy occurs, however, after three cycles, your doctor may opt to try a different medication.”

So how does Clomid work, exactly? It’s an oral medication that you take for fertility, and is an anti-estrogen hormone “that is designed to increase your natural hormones (follicle-stimulating hormone and luteinizing hormone) to help produce more eggs during the menstrual cycle” so you have a higher chance of getting pregnant, Sharma says.

Dr. David Diaz, a reproductive endocrinologist and fertility expert at Orange Coast Memorial Medical Center in Fountain Valley, California, agrees, and adds, “Clomid helps regulate a monthly release of an egg in a predictable manner to improve timing of intercourse, thereby increasing the odds of conception.” Diaz says at his particular practice, they monitor a woman’s response to Clomid by performing an ovarian ultrasound to document a mature egg sac — a follicle — “indicating the Clomid has achieved the desired effect. Our patient can then attempt to conceive naturally, or if a low sperm count is present, insemination can be performed. Without proper monitoring, it isn’t possible to know how each patient is responding,” he says.

Are you experiencing any side effects and want to know if that's normal? “Side effects are typically minimal, but include headache, nausea, bloating, minor mood changes, and occasionally blurry vision. Visual changes are a reason to discontinue Clomid,” Sharma says. According to the American Pregnancy Association (APA), other side effects can include an increased chance of having multiples, and an “increased incidence of miscarriage.”

If you're not currently taking Clomid, but are considering it, Sharma says, “Clomid is a good starting medication for infertility patients who do not ovulate on their own or for those patients [who are less than 35 years old] who are looking to increase their chances of pregnancy by "super-ovulating," or ovulating more than one egg to help conceive. It is often a first-line fertility drug for those who are just beginning infertility treatment.”

Sharma says if Clomid isn’t working by your third cycle of TTC, you may want to have your fertility doctor do more testing to look for other factors that are related to your infertility, and they may suggest an alternative medication. Diaz says during each month of using Clomid, you should be monitored by your doctor as stated above, because “excessive dosage and prolonged treatment can lead to toxicity and make pregnancy less likely to occur."

TTC is super stressful, and it's completely expected and normal to feel impatient. But even though it may feel like you've been trying forever, it typically takes a few cycles for Clomid to work. Just be sure to talk to your doctor about monitoring so that Clomid is only benefiting you and not bringing any negative side effects along.