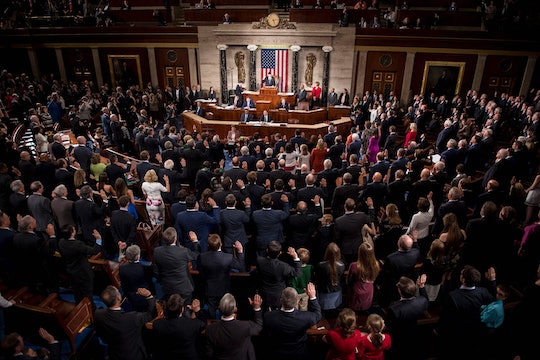 As day four of the new Trump presidency comes to a close, women all across the nation are straining to comprehend what exactly his position as commander in chief means to them — as a whole, and individually. Trump now has the power to make actual, concrete actions to back his many controversial campaign promises. And what's perhaps even more concerning than Trump's previous statements? Congress is also officially controlled by Republicans, and in addition to starting the repeal of Obamacare, they've already passed a new piece of legislation that tries to control women — and their bodies — in more ways than one. H.R. 7, officially known as the "No Taxpayer Funding for Abortion and Abortion Insurance Full Disclosure Act of 2017," seeks to make the Hyde Amendment permanent, and will affect millions of women across the country. Here's how H.R. 7 would affect parents, including you.

The bill, which cuts taxpayer funding to abortions across the board, would also mean that even women with full health insurance — and even if provided through a private insurer, such as through the Affordable care Act — would receive no financial assistance if they ever needed an abortion.

The Hyde Amendment, which has been around for years, since 1976 actually, makes certain that abortions are never federally funded (Planned Parenthood, for example, thought it receives funding, "bills" for services later, and may not "bill" for abortion services, in the simplest explanation). And while the Hyde Amendment makes exceptions for women who were victims of rape or incest, with the passing of H.R. 7, the only thing that's certain is that now, lower income women will have to find alternative means to pay for their abortions–that is, unless they decide to (dangerously) take matters into their own hands.

Even though abortion in the United States is a more diverse and complicated issue than anyone can really comprehend, that isn't stopping lawmakers from trying their hand at controlling what women are allowed to do with their bodies. According the the Guttmacher Institute, 59 percent of women who seek an abortion are already mothers to at least one child. So H.R. 7 seeks, in theory, to control not only women who are financially unstable, but those who already have families and who, for whatever reasons, need to terminate their pregnancy.

The Hyde Amendment has long been a controversial piece of legislation, but up until now, its power has been relatively limited. But today, Congress has changed all of that, and in doing so, made it abundantly clear that they have no regard for a woman's right to her own body, or to her own family.