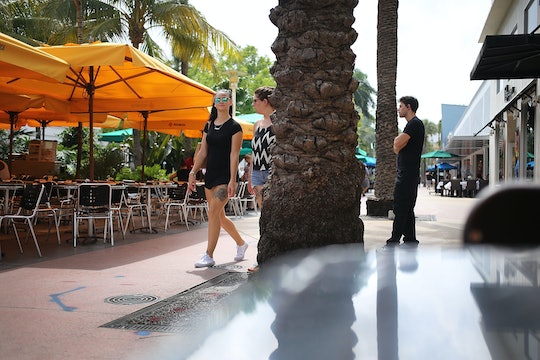 How Is Zika Affecting Tourism? Florida's Trying To Lure Vacationers

With confirmed cases of mosquito-transmitted Zika virus in two areas of Miami, the Wynwood arts district and Miami Beach, local leaders are scrambling to minimize the impact to the state's $82-billion tourism industry. The message? Think of Zika like a hurricane — Florida is prepared to handle it. How will Zika affect tourism in Florida? It might all come down to a marketing effort.

According to Miami Beach's CBS 12 News, Florida Gov. Rick Scott sat down at the end of August with a group of tourism officials from around the world to discuss the significant number of people who travel to Florida. Canada, which has more than 4 million of its people visit Florida annually, was represented. Other foreign consulates represented included Spain, Japan, Mexico, and Argentina. Travel warnings issued by these countries could have a huge influence on Florida's tourism industry.

CBS12 reported that the solution proposed by Miami Beach Mayor Phillip Levine was to ask for money for a national ad campaign to help lure vacationers despite Zika fears. Gov. Scott told CBS 12:

We all have to take this seriously. I'd like every tourist to come here, I don't want them to go to California or any other state, but I want everyone who is going to come here to know what we're doing and we're going to be prepared.

It's not the current tourists they're most concerned about, according to the New York Times; it's that this is the time of year people are making their winter vacation plans, and with Zika in the headlines, it might steer vacationers toward another destination. But if the effect is similar to how Zika impacted other tourism-dependent destinations like the Caribbean, the slow down isn't likely to last very long.

In the meantime, areas like Wynwood and Miami Beach are constantly being sprayed with pesticides in an effort to kill off the mosquitoes that carry Zika, according to Miami Beach's Local 10 News, leaving plenty of empty patio tables at places that would otherwise be teeming with tourists over the Labor Day weekend.

According to The Guardian, Florida Rep. David Richardson said it's still too early to speculate how extensive and sustained the Zika damage will be to Florida's tourism industry.

“The area where we are, zip code 33139, is the third largest collecting area in sales tax for the state of Florida after the theme park areas of Orlando, so we contribute a large amount of revenue to the state," Richardson said, according to The Guardian. "This is going to have an impact. But I’m hopeful that we’ll be able to deal with it and wrap it up quickly.”

He also said the areas needs more money to fight Zika, and that he thinks the money should be used for increased Zika spraying — which probably makes more sense to help Florida's tourism bounce back from Zika than a national ad campaign.