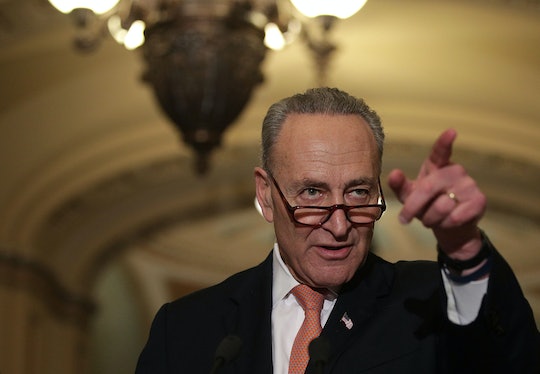 How Long Could The SCOTUS Nomination Fight Last?

It once seemed that congressional obstructionism during President Obama's second term was the worst the country would see. But now that President Trump has entered office as the least-popular incoming president in modern history, it's likely that congressional obstructionism will continue, this time around coming from the Democrats. Trump is expected to announce his Supreme Court nominee on Tuesday, and Senate Democrats will likely filibuster. But how long can Congress block a SCOTUS nomination? There's no sure answer to this, though history shows that protracted chaos is not unprecedented.

There are a number of ways that congressional Democrats can block, filibuster, or delay Trump's Supreme Court pick. According to CBS News, the most likely scenario is that Senate Minority Leader Chuck Schumer will lead Democrats in a filibuster that would disallow Trump's nominee from being confirmed with a simple majority of 51 votes in the 100-person Senate. To break the filibuster, Republicans would need to secure a 60-vote majority, which would require at least eight votes from Democrats. The Senate currently has a 52-48 Republican majority.

According to the U.S. Senate's government website, filibustering has been an integral part of the legislative process since the mid-nineteenth century. And to combat filibusters that continued for too long, a device called "cloture" was developed to end the filibuster. Historically, invoking cloture meant that a filibuster could be ended by a two-thirds supermajority vote. Since a two-thirds vote is difficult to obtain, filibusters would go on for months, if not years.

During the Civil Rights Era, filibusters were especially problematic because Southern senators regularly filibustered to prevent civil rights legislation from passing. This led to a 1975 law that reduced the bar for cloture from a two-thirds majority to today's 60-vote majority.

According to the Pew Research Center, the longest Supreme Court vacancy was an 841-day span between 1844 and 1846. This occurred when the Whig-controlled Senate essentially ignored all of President John Tyler's nominees, all the way through Tyler leaving office. Another whopper of a wait occurred between 1873 and 1874, when President Ulysses S. Grant had a headache of a time filling the vacancy caused by Chief Justice Salmon P. Chase's death. Grant's first four nominees turned the position down, and his next two nominees were unpopular. The vacancy was finally filled after 301 days.

Of course, in the recent instance of the Supreme Court vacancy after Justice Antonin Scalia's death in 2015, nominees were never considered, and the need for cloture was never invoked, because the Republican-controlled Senate wouldn't allow confirmation hearings to proceed in the first place. As a result, Obama's nominee, United States Court of Appeals judge Merrick Garland, was never even voted upon. Garland currently holds the record for the Supreme Court nominee who waited the longest for a hearing. He beat Louis Brandeis, who waited 125 days between his nomination and his confirmation.

In the end, Garland never received his hearing, and he was certainly never confirmed.

At present, it appears that Senate Democrats will follow the rules. Rather than refusing to hear Trump's pick at all, as Republicans did with Merrick, they'll filibuster the proceedings. In that case, the drama will end either with a 60-vote majority, or with the frightening prospect that Senate Majority Leader Mitch McConnell will change the rules and eliminate the filibuster. This has been referred to as the "nuclear option."

Whatever ends up happening, let's all hope that it will be as short and painless as possible.