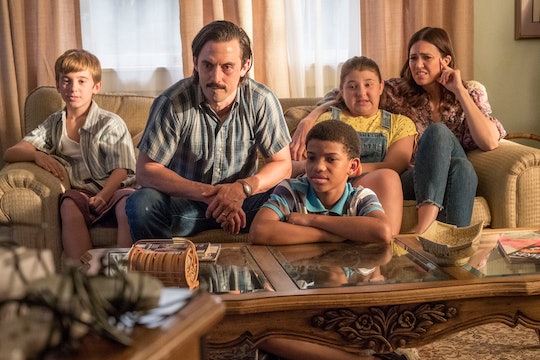 Once the credits roll on "The Beginning Is the End Is the Beginning," This Is Us will be taking a vacation. Though fans will likely find their Tuesday nights a little lonelier (but less dehydrating, without that weekly cry), they'll have to make do until the show returns to finish out its third season. But how long is the This Is Us Season 3 hiatus?

So far, a date hasn't been announced for the midseason premiere, so the exact length of the break is still uncertain. However, the schedule of the show's first two seasons could provide some insight into its current plans. Both seasons had eighteen episodes total; they premiered in mid-September (with Season 1 debuting on Sept. 20 and Season 2 on Sept. 26), ran through the end of November, and then took a break. Both seasons returned within the first two weeks of January (on the tenth and the ninth, respectively), making their hiatus around a month long, give or take a couple of weeks.

Season 3 of This Is Us has followed a similar formula so far. Its fall finale lands on Nov. 27, the last week in the month. If it sticks to the pattern of the last two years, then it should be back in early January, with a hiatus that lasts about four or five weeks long. Of course, that is purely speculative, so it is subject to change.

But before the show hibernates for the holidays, fans will have the mid-season finale to enjoy. And it seems like "The Beginning Is the End Is the Beginning" will be a major episode for the characters and the audience tuning in at home. It promises revelations about Jack's time in Vietnam and his relationship with his little brother Nicky, as well as the culmination of several season-long storylines. Kevin has been falling for Zoe while trying to investigate his dad's life posthumously. Randall is running for public office. And Kate is trying to support Toby through his depression while newly pregnant.

Executive producer and director Ken Olin, who was the man behind the camera for at least 14 episodes of This Is Us, revealed on Twitter that Episode 9 was going to be an important one. "It's a great episode that highlights our entire cast & shows what the best crew on television is capable of," he wrote. "Don't miss it — people will be talking about this episode for a long time."

While his tweet was frustratingly free from spoilers, one can theorize about what big reveal might have such a lasting impact on the audience. There are two lingering mysteries on This Is Us: a Season 2 flash forward to Old Randall and Grownup Tess visiting an anonymous "her," and whatever Jack went through in Vietnam. The flash forward hasn't been addressed yet this year, so it would be a shocking end to the first half of the season. However, Jack's past has been a thread running throughout Season 3, so there's likely to be some closure there as well.

Even if This Is Us leaves off on a cliffhanger, fans probably won't have to wait too long to see the Pearsons again. Hopefully the show will be back on your screens in just a few short weeks.

More Like This
When Does 'Yellowstone' Season 5 Come To Peacock? Not Soon Enough
Hey Fellas, 'Ted Lasso' Season 3 Is Coming Soon
The Best TV Shows For 5-Year-Olds
Jinger Duggar Was Taught Motherhood Defined Her — & Then She Broke Free
What Parents Are Talking About — Delivered Straight To Your Inbox