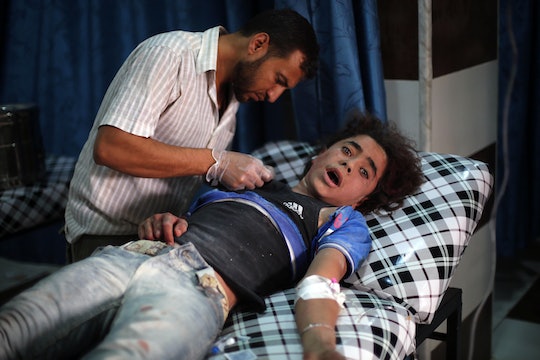 How Many Child Victims Have There Been In Aleppo? The Syrian War Has Taken A Painful Toll

A harrowing image of a bloodied Syrian boy, blanketed in dust with a calm, yet stunned look on his face has been dominating headlines and social media feeds, serving as a harsh wake-up call to the world of the horrifying reality that happens each day in the war-torn country. According to Reuters, the 5-year-old boy in question was identified by doctors as Omran Daqneesh. While it’s a miracle the toddler survived the heavy air strike on his home in the rebel-held al-Qaterji neighborhood of Aleppo, this has sadly not been the fate for many of the victims affected by the Syrian civil war, many of them children. This jarring photo and video, which shows the boy sitting silently in the back of ambulance as he wipes blood away from his face, has shocked the world and may lead some to ask the hard, but important question: How many child victims have there been in Aleppo?

The city has been the epicenter of Syria’s ongoing five-year-conflict and too many of the country’s most innocent victims have been caught in the crossfire. The recent image of Daqneesh — who has never known his home to be anything but war, as he is as old as the Syrian war itself — is a vivid and striking reminder of the human cost of the violent conflict. According to CNN, since the war began in the northern Syrian city more than 4,500 children have been killed.

But, the number of causalities is much higher when the entire country is taken into account. According to IAmSyria.org, the total number of Syrian children killed as a result of the war teeters at a horrifying 50,000, with 450,000 victims overall.

Miraculously, for 5-year-old Omran, he is not a part of that gruesome statistic. He is, however, being counted as another painful statistic: the frequently wounded. In Aleppo, according to Sky News, at least 20 children are being seriously injured every day in Syria's largest city by government forces. "I feel pain inside in myself," Dr. Abu Samir told Sky News in July. "More than 20 children a day come to the hospital."

According to UNICEF, one in three Syrian children has grown up knowing only known of a life of crisis, and 8.4 million children have been affected by the conflict overall, either in Syria or as refugees in neighboring countries. That's more than 80 percent of Syria’s child population, according to PBS's Frontline.

These numbers are horrifying and may seem shocking, but the photo of Omran wasn't the first time the world was shaken by this stark reality. Last year, Aylan Kurdi, a 3-year-old Syrian boy, was found washed ashore, face down on the beach of a Turkish resort, after the boat carrying his family to the Greek island of Kos capsized. The distressing image of the drowned child haunted the world for weeks, but as time passed, it seemed as though the urgency for world leaders to take steps also faded away.

As the violence, attacks, and bombings continue in Syria, it's important to remember the heartbreaking impact the war has on the country's children, even after the image of Omran moves away from headlines.

The one positive, albeit minute note that can be taken away from seeing the harrowing photo and video of the bloodied toddler is that it was able to grab the attention of the world and remind its leaders once again that more needs to be done — and fast.