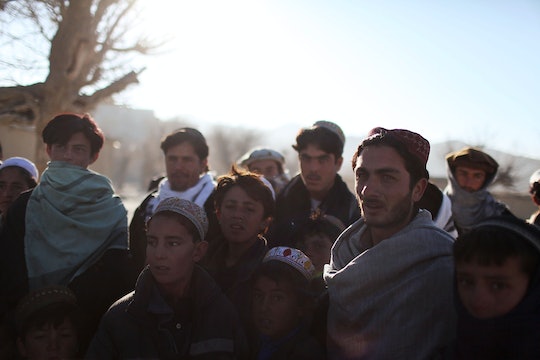 Were Any Civilians Killed By The MOAB Drop?

Dropping "the mother of all bombs," U.S. forces reportedly hit an Islamic State tunnel complex in Afghanistan on Thursday. In a statement, the Pentagon assured the public that forces "took every precaution to avoid civilian casualties with this strike," but how many civilians were killed by the Afghanistan bomb, if any? As of now, there have been "no immediate reports of civilian casualties," according to The Los Angeles Times. Sher Nabi, a local Afghan police commander, relayed that the bomb killed "many militants," while also destroying their weapons.

UPDATE: In a statement to Romper on Thursday, a Defense Department spokesman told Romper that officials had not "seen any reports of civilian casualties" thus far.

EARLIER: The non-nuclear GBU-43 bomb, also called the massive ordnance air blast (MOAB), was dropped by the United States in Nangahar Province, where "U.S.-backed Afghan forces are battling the Islamic State." At 30 feet in length and 21,600 pounds, the MOAB is the "largest conventional bomb in the American arsenal," according to The New York Times. Thursday marks the MOAB bomb's first use in combat. It was dropped by a MC-130 aircraft.

We targeted a system of tunnels and caves that ISIS fighters use to move around freely, making it easier for them to target US military advisers and Afghan forces in the area.

General John W. Nicholson, the commander of U.S. forces in Afghanistan, explained the use of the bomb further, insisting: "This is the right munition to reduce these obstacles and maintain the momentum of our offensive against ISIS-K." Nicholson also stressed that IS fighters at present "are using I.E.D.s, bunkers and tunnels to thicken their defense," and that the MOAB bomb was an attack on such defenses.

Currently, there are around 8,400 U.S. troops in Afghanistan that are working to execute other anti-terrorism operations against IS, many located in the province where the MOAB bomb drop took place. CNN maintained on Thursday that "the extent of the damage and whether anyone was killed is not yet clear. The military is currently conducting an assessment." Still, The New York Times notes that "the Pentagon has come under increasing criticism that as it has intensified the fight against the Islamic State in Iraq and Syria, the civilian death toll has risen sharply."

Worldwide, citizens are worried about the impact of such a weapon, especially if used improperly. Until the U.S. military investigates further into the casualties, both civilian and otherwise, the full impact of the bomb will remain unclear.