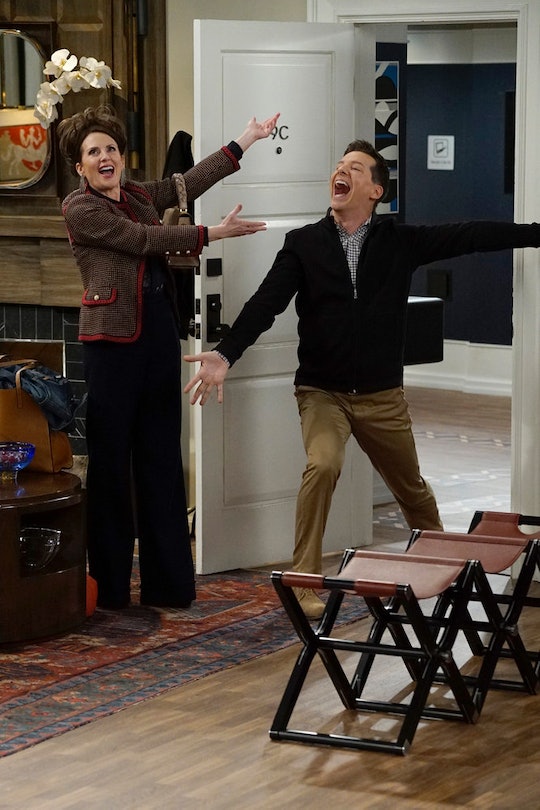 Fans Are Getting More 'Will & Grace' Than Originally Expected

Exciting news, everyone. Will and Grace is back on TV, which means that fans get to see more of Will and Grace and Jack and Karen being mean to each other even though they love each other. It's going to be awesome. But how many episodes is the Will and Grace revival? It's not going to be as long as the original show ran for each season, but viewers will still get more episodes throughout each installment than was originally anticipated.

Season 8, the last season of the original Will and Grace, had 24 episodes total, and ended with a bleak flash-forward to the future in which the two titular leads were happily married with children, but hadn't spoken to one another in 10 years. But when it comes to Season 9, the showrunners decided that a show about happily coupled parents and former best friends simply wouldn't be the show everyone had come to love. The show's Will and Grace are tragically lovelorn best friends who help each other through their messy lives that they always manage to mess up somehow. This is the Will and Grace that people who loved the show (that ended in 2006) want to see. And so that is the show we will get.

When the decision was made to bring the series back, we were like, well, we left them with kids, right? And if they have children, then it has to be about them being parents, ‘cause presumably it would be a priority in their lives. And if it wasn’t a priority in their lives, then they’re still parents, they’re just bad parents, right? We frankly did not want to see them being either good parents or bad parents. We wanted them to be Will and Grace.

Good. Because I want them to be Will and Grace too. But we won't be getting them for 24 weeks like in the good old days. Originally, the show was supposed to last for 10 episodes, as many streaming reboots are these days. Then the number was bumped to 12 episodes and then it was bumped to 16.

There's an argument to be made this reboot was never really necessary to begin with, considering how neatly the series wrapped up. But the people want it, and that is reason enough for me to bring it back.

Additionally, the rebooted series has already been renewed for a second season. Or I guess it's really a tenth season if you want to get technical about it, which as of right now will last for 13 episodes. Though depending on how well-received the first installment of the reboot is, I can very well see the series returning for more than 13 episodes as well.

In the age of prestige television, subscription services like HBO and Showtime as well as streaming platforms like Netflix and Hulu have started to overtake traditional network television in popularity and cultural clout. The age of the sitcom may very well be waning. While NBC has done very well with its hour-long tear-jerker drama This is Us, it doesn't have a popular half-hour comedy like Will and Grace once was. Perhaps this is why the network higher-ups have decided to bring it back, banking on the ready-made audience of the show to lure in viewers. And honestly, it's a smart move.

I loved Will and Grace back in the day. So consider me a member of that ready-made audience. Because I am here for it.