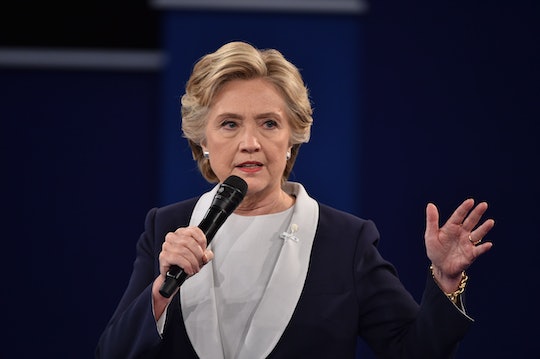 The second presidential debate, which took place on Sunday at Washington University in St. Louis, was a distressing showdown between Republican presidential nominee Donald Trump and Democratic nominee Hillary Clinton that likely left many viewers with a sick feeling in the pit of their stomachs. Perhaps it's for the best, then, that it wasn't the most-watched debate this election season. How many people watched the second presidential debate? According to CNN, 20 percent fewer viewers tuned into the second debate than the blockbuster first debate, which took place in late September.

"I think people are repulsed by it [the election] now," an unnamed TV executive told CNN upon learning about the lower-than-expected ratings.

Despite the substantial decline, though, the numbers were still extraordinary compared to some of history's lesser-watched presidential debates. This second debate attracted 66.5 million television viewers, while the first debate snagged 84 million, which is an all-time record for presidential debates. By comparison, the first presidential debate in 2000 between former Democratic presidential nominee Al Gore and former President George W. Bush garnered 46.6 million viewers —and that was the most-watched of their three debates. So while Sunday's viewership was lower than anticipated, it was still a strong showing in what has been a sensationalistic election season.

The lowered viewership might not be entirely due to Americans' disgust with the divisive and mean-spirited relationship between the candidates. For one, NBC, which aired the first debate, decided against airing the second in favor of the Giants-Packers NFL game. It's also possible that Hurricane Matthew power outages affected the ratings, according to CNN. But all told, disgust with the election was probably a factor. An article at The Guardian hypothesized that "people who had watched the previous debate had lost interest or perhaps the will to sit through it."

Interestingly, even as viewership was down, social media chatter was up — and it was already very high during the first debate. CBS News reported that the second debate was the most-Tweeted debate ever, with more than 17 million Tweets sent out in connection to the debate. During the debate, Clinton gained 25,000 new Twitter followers, while Trump gained 16,000.

The topic of Tweets was actually a useful indicator of what potential voters took away from the debate. According to CBS News, Twitter users "engaged the most" when Trump sold out his running mate, Indiana Gov. Mike Pence. When asked about Pence's position on military intervention in Syria, Trump said, "I disagree." Following this, the second-most Tweeted moment came when Trump said that Clinton should answer a question first because he's "a gentleman."

The third presidential debate will air on Oct. 19. It's difficult to say if the third will be as widely-watched as the first, but it's certainly difficult to imagine that it will be as controversial as the second. Then again, especially in this election, never say never.