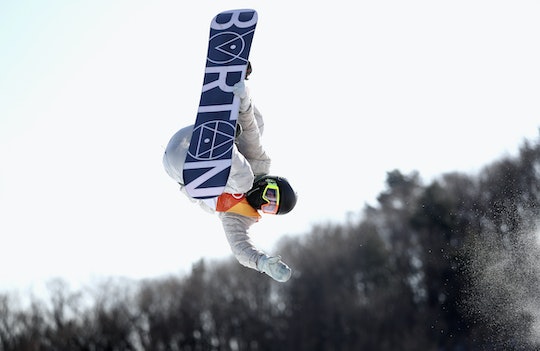 Here's How Much It Costs To Compete In The Olympics

If your little one is getting inspired by all the sick flips and sparkly outfits currently on display at the 2018 PyeongChang Games, you might be wondering how much it costs to compete in the Olympics. While it certainly varies depending on the sport, it's very rare for top-level athletes to make enough in prize and endorsement money to sustain their careers without side jobs, community support, and some serious financial backing from their families, and parents of Olympians routinely spend tens of thousands of dollars on their kids every year. And of course, that's on top of the $233,610 that it costs to raise a child through age 18, according to the U.S. Department of Agriculture.

Figure skating, the most high-profile sport at the Winter Games, is also one of the most expensive hobbies your kid can get into. It takes hundreds of hours of training to get to the Olympics, which comes with associated fees, and then you still have to factor in equipment, travel expenses, and a whole roster of professionals on retainer to help your kid become a champion. According to TIME, the total annual cost to become (and remain) an elite skater is between $35,000 and $50,000.

Olympic-level skaters usually train six days a week for hours at a time, TIME reported, and with that comes a $20 to $40 daily fee for access to the rink, and $65 to $120 per hour for coaching fees. A schedule like that makes attending public school impossible, so parents are also on the hook for a private tutor, as well. It'll run you up to $85 per hour for a certified teacher, According to Care.com. Athletes looking to compete in the Olympics and other events will also need to hire a choreographer to create both their short and long skate programs, which will be another $1,500 to $5,000 each. Most skaters also perform new routines every year. Some parents even shell out for ballet, ballroom dancing, or acting lessons for that extra bit of pizzazz to really sell the routine.

While top-tier skaters often score free skates through sponsorships, those who have to cover their own are looking at $1,000 for the blades, and another $800 for $1,000 for custom-made boots, which generally wear out every six months, according to TIME. And no look is complete without a hand-sewn costume dripping with crystals, which can run up to $10,000. There are also travel expenses associated with competing at domestic events throughout the year, and it's not just airfare and a hotel room for you and your child; you'll also be expected to pay for the coach's travel, and make up for their lost wages while they're on the road with you. And finally, there are the medical bills, physical therapists, and massages skaters need to stay in peak condition.

So where is all this money coming from? While many countries pay their athletes' way for the Olympics, the United States doesn't. The governing bodies for certain sports do provide some assistance, but only for the best of the best, and it's still only a fraction of what they'll end up paying themselves. Parents are usually forced to take on additional jobs, second mortgages, or start GoFundMe campaigns to send their kids to the big show. And it's often still not enough; according to ABC News, in the months before the 2012 Summer Olympics in London, gold medal-winning U.S. gymnast Gabby Douglas' mother, Natalie Hawkins, filed for bankruptcy, and the parents of her fellow gold-medalist, swimmer Ryan Lochte, were hit with foreclosure and a lawsuit from their mortgage lender.

While skating may be the most pricey sport, none of them are cheap, and competing in a less high-profile one also means it's harder to make a living off of endorsements. U.S. swimmer Missy Franklin told ABC News that she spent upwards of $100,000 in 2012 alone. Fencer Maya Lawrence told Forbes that she spent about $20,000 to get to the London Games, and even table tennis players can expect to spend $15,000 a year on coaching alone, never mind paddles and international travel. And what do they get in return? Team USA javelin thrower Cyrus Hostetler told the Washington Post that the biggest profit he ever saw in one year was $3,000. Meanwhile, the coaches and directors of the governing bodies of sporting organizations usually make six figures. Seems like it might be better to stick with T-ball.