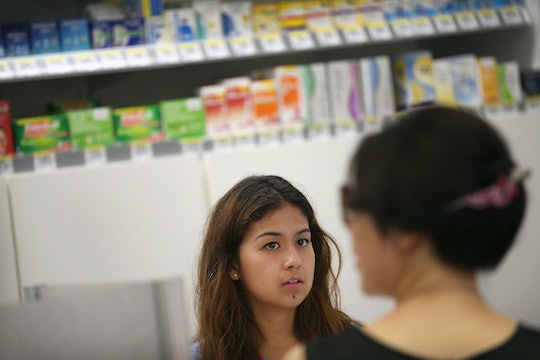 I got this year's dreaded flu and I can report that it was every bit as bad as it was made out to be (and that was with a flu shot). I didn't leave the house for five days. All I could do was lay in the dark listening to podcasts because even watching tv was too exhausting. Yeah, it was that bad. So if you've managed to avoid this year's flu outbreak, consider yourself #blessed. But are you out of the woods? If you're wondering, How much longer does flu season last, you'll be relieved to hear the end is nigh.

Officials from the Centers for Disease Control (CDC) confirmed that the flu peaked in early February, according to Time. But while the prevalence of the flu may be on the downward swing, we're still not totally in the clear.

“Even though it looks like flu activity is decreasing in some parts of the country, there’s still a lot of it out there,” said CDC spokeswoman Kristen Nordlund in an interview with Time. “We’re not out of the woods yet. It’s likely that we’ll probably see flu activity through the middle of April.”

The good news is, it's almost April and that means you only have a few weeks to go before you can say you survived flu season.

Back in mid-January, Dr. Paul Biddinger, director of the Center for Disaster Medicine and vice-chairman for emergency preparedness at Massachusetts General Hospital in Boston, told New York Magazine that we could expect at least 6-8 more weeks of flu season. According to my calculations, 8 weeks have passed, and so the optimist in me says the flu will soon be in our rear view mirror.

But let me add a word of caution: I came down with the flu shortly after I had heard flu season had peaked. I'm convinced that it was exactly when I let down my guard that the flu, sensing weakness, sunk its fangs in. So continue to be vigilant — I'm talking 'borderline OCD' vigilant.

That means washing your hands a lot. Do you know how to truly, effectively wash them? I know that may sound like a ridiculous question but it turns out even some doctors aren't doing it right, according to Medical Daily. A 2016 study looked at healthcare workers using the 6-step hand washing process recommended by the World Health Organization (WHO), compared to the 3-step one then recommended by the CDC, according to Science Daily.

"Ultimately, the researchers said that even though the six-step technique to reduce bacteria was nearly four times better than the more commonly practiced one, it still took an average of 42.5 seconds longer" reported Medical Daily in the same article mentioned above.

So while the WHO's 6-step hand washing technique is an upfront time-commitment — the organization recommends allowing about 1 minute — in the end it is well worth the effort.

Particularly for parents of infants too young to get the flu shot, taking the time to follow the WHO's 6-step washing process seems like an absolute must — both to protect your baby's health AND your sanity.

As a mom of two toddlers, I barely have time to go to the bathroom, let alone wash my hands for a full minute — but I will start making time from here on out. This year's flu taught me you can't be cavalier in the hand washing department!

So while flu season is on its last leg, it's still understandable to want more assurance that everything is going to be alright. If you want to know how the flu activity is looking in you state, the CDC has an interactive map you can check out here.