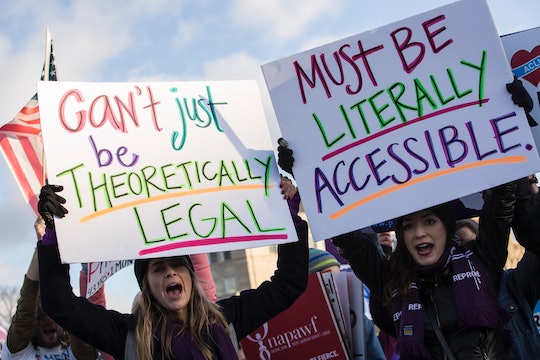 How Much Would the Personhood Bill Cost The US?

H.R. 586, commonly known as "the personhood bill," is a federal bill recently introduced by Congressional Republicans which seeks, as quoted, "to provide that human life shall be deemed to begin with fertilization.” "Personhood" bills look to classify fertilized eggs, zygotes, embryos, and fetuses as “persons,” which would give "them" full legal protection under the U.S. Constitution, including, most specifically, the right to life from conception. If such a bill were to pass, what would the personhood bill cost the United States? To get an idea, we need look no further than at the costs of unsafe abortions in nations in the developing world.

H.R. 586 is similar to other "personhood" bills proposed in the past. The Life at Conception Act, proposed in the Senate back in 2013, and the Sanctity of Human Life Act, which was proposed in the House the same year, are two such examples. But not much has been said about what the costs of limiting access — and the costs of complications of unsafe abortions that would result from its passing — could look like. The Guttmacher Institute, described as "a leading research and policy organization committed to advancing sexual and reproductive health and rights in the United States and globally," has plenty of information about what those costs look like in other countries, which could paint a picture of the sort of direction the United States could go in if we adopted such "personhood" policies.

According to a study from the Guttmacher Institute, the abortion rates in the United States have dropped to the lowest level ever recorded. That's great! The study goes on to state that improved use of contraceptives in recent years has led to a decrease in the rate of unintended pregnancies in the United States. However, it also states that more limited access could have also been a factor. Rachel Jones, lead author of the study, said:

Abortion restrictions and clinic closures mean that patients may need to travel greater distances to access services. The majority of abortion patients—75%—are poor or low-income, and nearly two-thirds are already parents. It can be very difficult for them to arrange for time off from work, transportation and child care. While many find ways to access care despite these obstacles, some of the abortion rate decline is likely attributable to women who were prevented from accessing needed services.

It stands to reason that if more low-income individuals can't access abortion care, they may have to continue with unintended pregnancies, and may then need more assistance to care for the children that result from those pregnancies. That alone would incur costs to the country as a whole.

When it comes to the costs incurred by unsafe abortions — which would result from more limited access — on a health care system, we can actually look to other countries that have limited access to abortion to see what the numbers might look like. All told, according to the recent Guttmacher study, treating the complications resulting from unsafe abortion costs Africa and Latin America $227–280 million each year. And when the Asian and Pacific regions are taken into account, unsafe abortion costs the developing world at least $341 million. Now imagine if we added the United States to those numbers.

“Because virtually all unsafe abortions are a direct consequence of unwanted pregnancies, the costs calculated in this study result from the failure to prevent those pregnancies through family planning or, where legal, to terminate them safely,” said lead author Michael Vlassoff, a senior research associate at the Guttmacher Institute. So, in other parts of the world, limited access to reproductive health and family planning services and abortion leads directly to unsafe abortions and the costs that arise from them.

The solution? According to the authors, safe abortion, and access to contraceptive health services.

The authors urge governments to take into account the direct system costs of unsafe abortion and to compare them with the much lower costs of measures that could prevent unintended pregnancy and unsafe abortion—namely, providing contraceptive services and ensuring access to safe abortion where it is legal.

Bills like H.R. 586 look to limit access to safe, legal abortion. But there is evidence that shows that doing so in other parts of the world leads to a severe financial strain on health care systems. If more restricted access is put in place here, and more illegal abortions are performed as a result, the United States would likely follow suit.