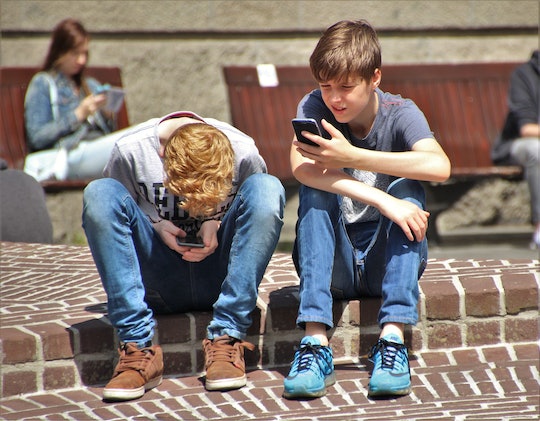 Everyone's done it before. When your kid is getting antsy at the grocery store or starts fussing in the drive-thru lane, you've probably tossed them your iPhone and told them to play a game — it's harmless enough. But with more kids getting their own cell phones to call, text, and play games with, their daily screen time has risen sharply, too. To figure out the side effects of this shift, the medical community has been researching the upsides and downsides of how playing iPhone games affects your kid later in life.

When I was a kid back in the ancient '90s, I shared a single landline with my parents and two siblings. Fast forward to today, the Kaiser Family Foundation reported that 66 percent of all 8 to 18-year-olds own cell phones, and most of these kids aren't using their phones to call up their friends. Instead, their screen time includes a mix of texting, social media, TV shows and movies, and gaming, according to the American Academy of Pediatrics (AAP).

Despite what your mother-in-law might tell you, media usage does indeed have its upsides, especially when it comes to smartphone games. "Gaming is a wonderful social activity, allowing kids to engage in a form of fantasy play," relayed pediatrician Natasha Burgert on her medical website. "Manipulating interactive media is going to be a critical skill for our kids to learn, and gaming is a fun way to practice." Certain games can also teach important skills — like improving vocabulary, mastering multiplication, or even promoting racial and ethnic tolerance — but there are negative effects you should consider as well.

The downsides of iPhone games usually stem from two factors — too much screen time and too little adult supervision. Kids who are given unlimited and unrestricted media usage may consume hours of it per day. The AAP recently concluded that the average 8 to 10-year-old spends almost eight hours per day on various forms of media, and a decent chunk of that time is dedicated to playing games on a computer, console player, and smartphone, which can take a toll. Excessive media usage and gaming can lead to lower grades at school and lower levels of contentment, noted the Kaiser Family Foundation. Some kids may struggle with obesity as well due to a sedentary lifestyle, and that can bring on serious health conditions when they become adults.

To minimize the negative effects of iPhone games, be sure to set time limits on how much your kid consumes daily. The AAP recommended cutting off media usage at two hours per day while Burgert suggested knocking that down to one hour. Along with setting time limits, consider supervising your child's gaming by steering them toward more educational choices — and maybe even playing with them. That way, you can carve out more family time and stealthily monitor what your kid is doing.

Smartphones aren't inherently good or bad, and neither are smartphone games. But with so many kids owning cell phones at younger ages, parents have to be vigilant about what games our children and teens are playing. While it can be exhausting to constantly monitor screen time and supervise what apps your children are downloading, your rules will set healthy boundaries — and one day your kids will thank you for it.