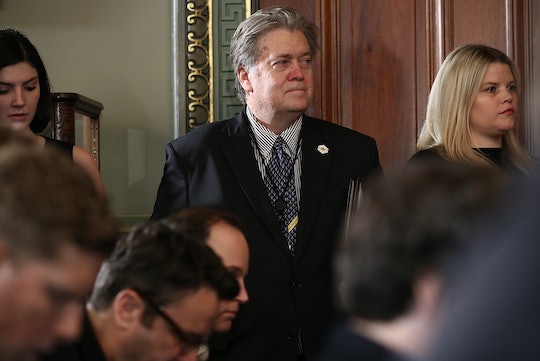 Why Are People Freaking Out About Steve Bannon?

Of all the people named to President Trump's cabinet, perhaps the most contentious and worrisome is Steve Bannon. The man behind the conservative website known for sensational headlines, Breitbart, has now become Trump's closest White House advisor. How powerful is Steve Bannon? His new security council role gives him a lot of influence, much of which has already been demonstrated in terms of President Trump's policies.

Bannon is not a new face of course: he was Trump's campaign manager during the election and was promoted to chief strategist as soon as Trump took office. As if that high-level appointment had people unsettled enough, within a week of taking office Trump had also appointed Bannon to the National Security Council. For the uninitiated, the National Security Council is the organization that briefs the president on issues of national security and therefore is the keeper of intelligence on these matters.

That information often comes from the military, FBI, CIA, and other agencies who are employed to investigate terrorist organizations or assess domestic threats. Historically speaking, not just anyone in the president's inner circle gets to come to these meetings. The information is highly confidential and, quite literally, matters of national security that could be extremely dangerous if they landed in the wrong hands.

Of course, usually "landing in the wrong hands" means being leaked outside of the White House. Many argue that with Bannon now having a seat in these meetings, the "wrong hands" may also include those who are currently in the White House. Trump has attempted to justify the placement by pointing out that Bannon, who has spent the majority of his career in media, served in the Navy. That's true: Bannon did spend four years in the Navy. But if that's all, it kind of pales in comparison to the career military folks who usually serve in the highest levels of the National Security Council.

While those individuals are often known for their achievements and experience in the military, Bannon is largely known for running a website that publishes articles with titles like: "Birth Control Makes Women Unattractive And Crazy," as well as articles that glorify white supremacy. Bannon himself has said Breitbart is "the platform for the alt-right," — the "alt-right" referring to a group of far-right conservatives who some have argued pose a terrorist threat themselves due to their radicalized beliefs and Neo-Naziism.

Bannon's role on the council is not exactly clear, and part of the confusion stems from the fact that these council meetings are strictly for "need-to-know" people, such as military generals. Trump, of course, would be in attendance as president, but why his strategist (who is essentially meant to handle his "brand") would need to be informed on the fine details of national security is the question many are asking.

Some aren't asking at all, but rather, alleging that this appointment means Bannon is the one calling the shots in the White House, and Trump is just his mouth piece; a theory that got a lot more traction after people remembered an interview Bannon did with Vanity Fair in which he referred to Trump as "blunt instrument for us," adding "I don’t know whether he really gets it or not.”

Senior members of the Department of Homeland Security have said that Trump's executive order regarding immigration was heavily influenced by Bannon, who had been involved in its drafting, according to Newsweek. While it's not clear what degree of decision-making power Bannon has on his own, those who have commented on his involvement seem to be worried that Trump is making decisions based solely on Bannon's advisement.

DHS members have reportedly said that it was Bannon who opposed the portion of the immigration ban that would have exempt green card holders, according to The New York Times. Romper has reached out to Trump's representatives regarding Bannon's role and its connection to the immigration ban, but have yet to hear back.

As Trump's chief strategist, it's expected that Bannon's opinion would have influence: the concern is that as Trump continues to eliminate or otherwise push out those in Washington who disagree with him, he is allowing Bannon's beliefs to dictate what decisions he makes as president.

Bannon's appointment to the security council, though, seems to have Washington insiders the most concerned. Not only is it unprecedented (prior presidents have banned their strategists from the meetings, and Obama, though he did let his sit in on a few, never gave him a permanent seat) it undermines the separation between politics and national security that could have catastrophic consequences. The council has a lot of decision-making power when it comes to starting a war, and other countries' perception of the makeup of that council could certainly impact their war-related decisions. In other words, if the world perceives the council as weak or overly politicized, they may see it as an opportunity.

While Trump clearly wants Bannon at his side throughout his presidency — whether to provide advice or just continuously assure Trump that he's doing a good job despite what approval polls, Twitter, and the media say — he should perhaps think again when it comes to giving him full access to the country's most tightly guarded national security secrets. If he wants Bannon to know how much his commitment means to him, maybe he could spring for some friendship bracelets instead.