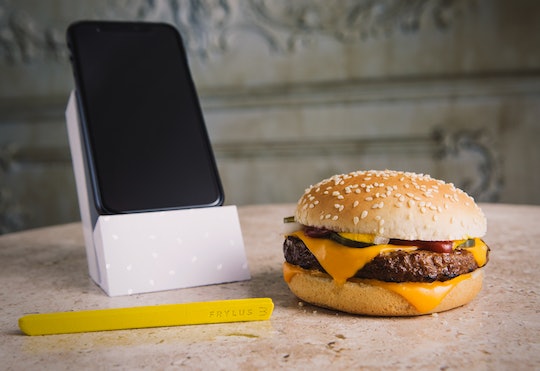 How To Get A Free Frylus From McDonald's On #NationalSelfieDay

What is it about the word "free" that makes literally anything at least 50 percent more desirable? Whether it's greed, gluttony, or the sheer thrill of finding a bargain that drives you, here's how to get a free Frylus from McDonald's in honor of #NationalSelfieDay. What's a Frylus, you ask? Who cares? It's free! And you can have one! For free!*

OK, fine. I'll tell you what it is. The Frylus is the latest silly plastic giveaway from McDonald's, created to promote its new "100% fresh beef Quarter Pounder burgers" (no word on what the old Quarter Pounders were), which the company promises are hotter and juicier than the original. McDonald's anticipates its customers will get all manner of detritus on their hands when eating the improved sandwiches, which means potentially gumming up their phones on #NationalSelfieDay. Who takes a selfie while eating fast food? Probably the same type of person who would celebrate #NationalSelfieDay to begin with. It's called synergy, folks. Enter the Frylus, a stylus that looks like a french fry, bundled with a bonus phone stand. Get your ketchup and 100 percent fresh beef juice all over that thing, whatever. At least your phone will stay pristine.

To promote the Frylus, McDonald's has teamed up with Kirby Jenner, an Instagram phenomenon who you're about to fall in love with. Posing as an amateur model/Kendall Jenner's secret twin, Jenner flawlessly Photoshops himself into images and videos with the Kardashian-Jenner family. In a promotional video for the Frylus, Jenner perfectly captures the elegance, excess, and WTFness of a fragrance ad. Only it's for a plastic fry that you use to take a selfie when your hands are filthy with drive-through food.

This isn't the first time McDonald's has offered a free doodad that's equal parts "Gotta have it" and "God, why?" Last year, the Shamrock Shake got updated with a chocolate layer, meaning a conventional straw would deliver a chocolate shake for the first half of customers' drinking sessions, then mint once the chocolate was gone. So it hired a team of actual engineers to create the STRAW (Suction Tube for Reversal Axial Withdrawal), an upside-down bendy straw with three holes to capture the ideal flavor ratio of half chocolate, half mint. I mean, they could have just trained their employees to mix the shakes, or bought some swirl machines from all those frozen yogurt places that have gone out of business, but whatever.

Last year was also the year of the Frork, a plastic utensil that houses three fries which customers can use to scoop up all the condiments that ooze out of their burgers (messy sandwiches are kind of their thing). McDonald's even got Anthony Sullivan, the OxiClean guy, to film a rather enjoyable infomercial pitching the ridiculous contraption. But while the STRAW is wholly unnecessary and the Frork is so silly, the Frylus is actually kind of useful.

Why would one need a Frylus if they don't plan on snapping selfies during their sad parking lot lunch? Think about all the times you've been checking out at CVS and ended up with that janky credit card machine with no pen, just a filthy, overly-taped note on which someone has scrawled, "Use finger." Or maybe you have a toddler who likes to play Angry Birds on your phone. Their hands are always sticky, even when they're fresh out of the bathtub. And don't forget that stand, which will come in super handy for those times when you're not in the mood for a 100 percent fresh beef Quarter Pounder burger, and you need to follow a recipe to cook dinner.

If nothing else, the Frylus is a conversation piece, and perhaps even an investment; those McNugget Buddies from Happy Meals are fetching anywhere from $2 to $5 on eBay now. There are only 100,000 Fryluses in existence, and you can get one of your own while supplies last at more than 2,000 participating McDonald's locations. You will have to purchase a Quarter Pounder to get one, but at under four bucks, it's totally worth it.