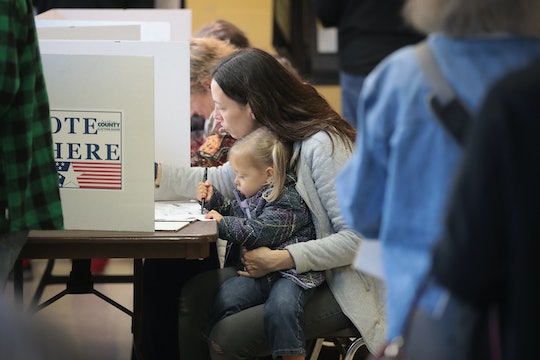 The 2018 midterm elections saw a record voter turnout. An estimated 113 million people head to the polls to cast their ballots, according to CBS News. Of that, more than 35 million voters turned out during early voting. But even with these record numbers, millions of people in the United States still had their voting rights suppressed and face many issues at the polls. Want that to end? Here's how to help fight voter suppression right now before the next election rolls around so that everyone is able to exercise their right to vote.

Although claims of voter suppression have occurred in most states, there is only one that has been a prime example of its pervasiveness: Georgia. In a flagrant attempt to infringe on voter rights, the office of the Georgia Secretary of State Brian Kemp, the Republican candidate in the state's gubernatorial race, reportedly put 53,000 voter registrations on hold by using the "exact match" system, which is riddled with errors in and of itself, according to Vox. Nearly 70 percent of those registrations belonged to black voters in the state. Not only that, but Kemp, who is challenging Democrat Stacey Abrams for the governor seat, has claimed that Democrats have tried to hack Georgia's voter registration system, though he had no evidence to make such a claim, as Vox reported. (As of Wednesday, Abrams has refused to concede because the race is too close to call, according to CNN)

To help ensure everyone has the right to vote, here are just a few action steps you can take.

Early voting is a great way for states to ensure that every single eligible voter can cast their ballot. Thirty three states, plus Washington, D.C., all have early voting laws on the books, according to the National Conference of State Legislatures, which means working people, older people, single parents, and people with disabilities — among so many others — have a greater opportunity to have their voices heard.

But states have begun cutting back on early voting over the last seven years, reducing the number of days or eliminating nights and weekends, according to the American Civil Liberties Union. By cutting early voting, lines become longer and fewer voters turn out, thus giving politicians behind these changes the partisan gain they are looking for.

Want to stop early voting from being chipped away in your state? Contact your representatives and voice your concerns. Oppose any measures that seek to reduce early voting time. Take to the streets and explain to everyone you can why early voting is important.

Conservative politicians across the country have used voter fraud as a justification for passing voter ID laws, even though it's been proven that voter fraud is a virtually non-existent issue, according to NPR. What voter ID laws actually do is discriminate against marginalized populations — people of color, people with disabilities, and transgender people, to name a few — by creating unnecessary barriers to voting.

By requiring a government-issued photo ID to vote, states deprive certain people the right to participate in the voting process and exercise their civic duty. In other words, according to the ACLU, voter ID laws suppress the voice of the people. If a voter ID bill is up for a vote in your state, contact your legislators and urge them to strike the legislation down. Talk to your fellow voters as to why voter ID laws are problematic. And if a similar bill is on the ballot, vote against the measure.

Gerrymandering is a commonplace voter suppression tactic in the United States. It occurs when districts are redrawn to tip the scales in favor of certain politicians, according to the ACLU. Through gerrymandering, elected officials are able to secure their place in office by manipulating district lines so that one party or class is favored, as The Washington Post explained.

This, in turn, distorts representation and constituent interests. When you see gerrymandering happening in your town, protest it! Call out your local officials, make noise, and vote them out.

Last year, Dem. Senator Patrick Leahy of Vermont and Dem. Representative Robert Brady of Pennsylvania introduced the Automatic Voter Registration Act of 2017. The legislation would "improve the accuracy of voter records, cut down on costs, modernize outdated registration systems while supporting implementation in states across the country," according to the League of Women Voters.

Want to see the bill make headway? Then call or email your members of Congress and urge them to support the Automatic Voter Registration Act.

Denying convicted felons the right to vote is a long-standing voter suppression tactic, but it's slowly being dismantled. On Tuesday night, for example, voters in Florida approved Amendment 4, a ballot measure that restored the voting rights to more than 1 million previously convicted Floridans, according to ABC News.

Supporting similar measures in your state or pressing your lawmakers to introduce voter restoration laws will go a long way in fighting voter suppression in your state.

One important way to fight voter suppression is by voting in officials who will protect voting rights. And I don't just mean your state senators, House representatives or governors. I'm also talking about district judges. District judges have been crucial in striking down voter suppression tactics over the past few years. In North Dakota, for example, a federal judge blocked the state's voter ID law because it imposed “substantial and disproportionate burdens” on Native American voting rights, according to The Washington Post.

Sometimes, the easiest way to fight voter suppression is by spreading the word. That could mean having discussions with your friends, family, and even total strangers, by hosting a voting rights house party. Or write a letter to the editor of your local newspaper to educate people in your community. Let people know about their right to request an absentee ballot, and what an absentee ballot entails.

Voter suppression is not something that should be addressed only when election time rolls around. Efforts to restrict voting rights are ongoing, even during the off-season, and should be fought at every step of the turn. Let's not wait until it's too late.

More Like This
It's Not Just Covid: Doctors On Why Everyone's Getting Sick Right Now
Biden Signs Law Banning Unsafe Infant Sleep Products Attributed To Over 200 Deaths
This Free Website Connects Parents Who Need Formula With Those Who Have It
13 Moving Photos Of Kids, Families, & More Protesting Abortion Rights Across The Country