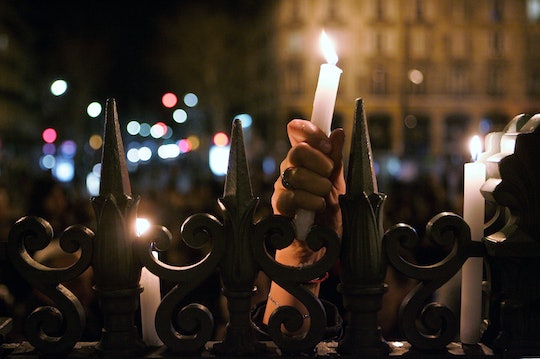 The remains of a 17-year-old Virginia girl were found in a pond by police on Sunday, sending shockwaves not just throughout her local community, but also nationwide. Nabra Hassanen was assaulted and killed on her way back to her mosque, and her mother is now speaking out about the loss. Here's how to help Nabra Hassanen’s family, because they deserve unwavering support — and the trauma that they've just experienced should never happen again.

Reports stated that Hassanen and four or five other teenagers left the All Dulles Area Muslim Society (ADAMS) mosque early Sunday morning, and headed to a nearby restaurant for breakfast. Twenty-two-year-old Darwin A. Martinez Torres, the suspected assailant, was allegedly "at the McDonald's eating at the same time and he followed them in his car," family friend Yufra Abdelmuid told BuzzFeed News. "He threw a beer bottle at them and they started running to the Bowl America parking lot nearby and he got out of his car with a bat and hit her over the head," Abdelmuid claimed. Reports from The Washington Post stated that the group was walking back from an IHOP when they were allegedly confronted.

Police believe that Torres then allegedly assaulted Hassanen. The other teenagers ran back to the mosque without her, later reporting her as missing. The incident occurred around 4 a.m. Eastern Time, in the hours before Muslim Ramadan fasting is set to begin. At the time of the attack, Hassanen and her friends were wearing traditional Muslim headscarves called abayas. However, early Monday morning, Fairfax County Police tweeted: "We are NOT investigating this murder as a hate crime."

Hassanen's mother, Sawsan Gazzar, told The Post she believed the assault and murder took place allegedly because of "the way she was dressed and the fact that she’s Muslim." Gazzar wondered: "Why would you kill a kid? What did my daughter do to deserve this?" On Sunday night, the mother of four daughters asked her friends: "Pray for me that I can handle this ... I lost my daughter, my first reason for happiness."

A fund to help Hassanen's family on the Muslim-focused crowdfunding site LaunchGood has raised nearly $200,000 as of Monday. Sponsored by ADAMS, the page also shares helpful information regarding community news about the tragedy. Donations to this cause will help the family take care of funeral costs and other expenses, lightening their load.

In addition to fundraising, a couple of Qur'an readings have also been organized as a blessing for Hassanen, and a vigil will also take place on Wednesday in her honor.

"This is a time we all need to come together to collectively heal," ADAMS shared in a statement on its website. The center has offered counselors onsite and will continue with its "daily and nightly Ramadan prayers." ADAMS will likely be a source of support for Hassanen's family, along with the various community gatherings and vigils that are scheduled. In donating to ADAMS' family-focused fund, families all around the world can show their support for Hassanen and make a firm statement against the violence that ended her life.