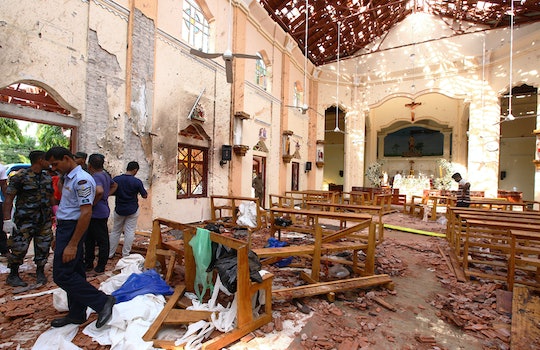 Close to 207 people have been killed, and hundreds more injured, after a series of bombings at different churches and hotels on Easter Sunday in Sri Lanka, according to the Associated Press. Most of the explosions reportedly went off near the country's capital, Colombo, and seven suspects have been arrested. The attacks have left people in the country and abroad reeling, wondering how to help people affected by the Sri Lanka bombings.

Three churches and three hotels were targeted with nearly simultaneous blasts, according to the AP. Hours later, two more explosions went off at a guesthouse and an overpass just outside of Colombo, according to a report from the BBC. In addition to the more than 200 people who have been injured in the attacks, hundreds more were hurt. Sri Lanka's prime minister Ranil Wickremesinghe condemned the attacks on Twitter, according to the outlet. He called the bombings "cowardly," and said the government took "immediate steps to contain the situation." Wickremesinghe asked the public to "avoid propagating unverified reports and speculation" in the wake of the explosions. Minister of Finance Mangala Samaraweera called the attacks "a diabolical attempt to create racial and religious tensions" in Sri Lanka in a video statement posted on Twitter. He also asked that "all media stations refrain from sensationalising these tragic events." Buzzfeed News noted that no one group has claimed responsibility for the attacks at this time.

The Sri Lankan government news portal states that all social media has been temporarily blocked following Sunday's string of attacks. This is an effort to avoid the spreading of false reports, according to the portal. Per Buzzfeed's reporting, the government in Sri Lanka has asked the public to avoid division as a result of the attacks. According to the outlet, Sunday's bombings come a decade after a lengthy civil war between a separatist militia Tamil Tigers and the Sri Lankan government. The unrest ended in 2009, according to Buzzfeed, and an estimated 70,000 people were killed.

The Shangri-La Hotel in Colombo confirmed that an explosion occurred at about 9 a.m. local time on Sunday in a Facebook statement. The hotel revealed in its post that an investigation into the bombing was ongoing, adding that it was working with authorities. The Shangri-La Hotel went on to say that it was "deeply saddened and shocked by the incident." The Kingsbury Hotel in Columbo also released a statement confirming that a bomb went off there, revealing that injured guests and employees were being treated and everyone had been evacuated.

"We share in the shock, grief and mourning of our entire nation in the aftermath of the recent attack," the hotel said in its statement.

A third hotel, the Cinnamon Grand, also confirmed that they were affected by the explosions. The business said in a statement that the area has been "isolated for investigations." The Cinnamon Grand revealed little else about what happened, or how many people there were hurt or killed in the blast.

Churches in Colombo, Negombo, and Batticaloa in Sri Lanka were also targeted, CNN reported. In total, eight bombs went off on Sunday. According to the outlet, in addition to the three hotels hit, bombings occurred at St. Anthony's Shrine, St. Sebastian's Church, Zion Church, a site near Dehiwala Zoo, and a house in Mahawila Gardens in Sri Lanka. The outlet said visitors, Sri Lankan churchgoers, and more were killed and injured in the attack. The final blast, which took place in a housing complex, claimed the lives of three police officers, The Independent reported, citing Reuters.

Following confirmation of the bombings, Sri Lanka as a whole has received an outpouring of prayers and verbal support from world leaders and the public in general. While those sentiments are always welcome in the wake of tragedy, they do little more than offer comfort to victims and their families. There are a number of ways to actually help people affected by the bombings. People currently residing in Sri Lanka with any factual information that may be helpful in pining down a motive for the bombings, or catching people responsible, are being asked to dial the emergency phone at 119, or police headquarters at +94 11 2421111, to share tips, according to Indy 100. You can also make a donation to the Sri Lanka Red Cross, which provides support after disasters such as this one, on its website.

As Buzzfeed reported, volunteers have rushed to the National Blood Transfusion Service to donate blood to victims. It's unclear if the organization is still accepting donations, or looking for more, at this time. One Twitter user said the National Blood Transfusion Service, as well as other hospitals in the area, have asked for people to stop coming in as they have collected enough. That could change, however.

Those looking to make monetary donations to help the people of Sri Lanka have several options. A campaign to raise money for the victims was started by a member of the public on the Red Cross' site. It is seeking to raise $5,000 USD. A GoFundMe has also been started by another member of the public seeking to raise $500,000 USD. At the writing of this story it had only raised a little more than $1,000.

It's never easy to sit back and watch a tragedy unfold from afar, but it's especially difficult to learn of such a tragedy on a holiday when people are gathering with family and friends to celebrate an important day in their faith. Being far from the incident can leave you feeling helpless, but there are no shortage of ways to get involved no matter where in the world you are. Each little bit helps.