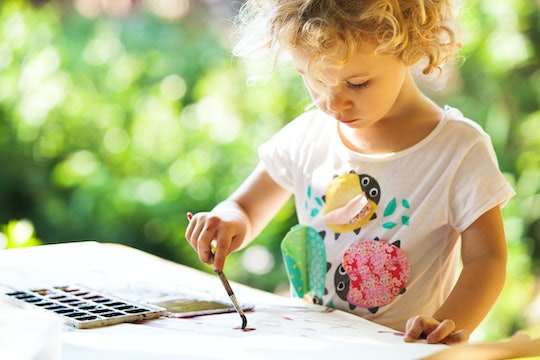 Have you ever caught yourself in a moment of frustration with your child and scolded them with "I can't believe how messy you are!" after you walk into a room filled with toys scattered about and dirty clothes all over the floor, hours after you asked for them to pick everything up? I sure have. What I didn't realize at the time was that my wording was potentially doing damage to my son and this one simple thing has a wild way of affecting my child's self-esteem.

When I told my son that he was messy, I was characterizing him as a person instead of describing a behavior that I disliked, which experts say can be harmful to his self-esteem. According to Michael Mintz, PsyD., a developmental psychologist with Children's National, "Children learn to identify with words that are used to describe them. Indeed, they often learn to think of themselves in those terms," he tells Romper. "For example, if we referred to a child that is 'bad' [as 'bad'], that child may begin to think of themselves as 'bad,' and they may begin engaging in negative or externalizing (i.e. 'acting out') behaviors as a way to confirm their (or others’) expectations that they are 'bad.'"

Maureen Healy, author of The Emotionally Healthy Child and child development expert at Growinghappykids.com, says that the words parents choose to explain acceptable actions versus unacceptable actions is what it all boils down to. "Boys and girls who are told they are 'bad' oftentimes internalize those words and create a damaged self-concept. They begin to feel like they're 'not good enough' or there is something wrong with them. But a child who recognizes that some behaviors are acceptable, and some behaviors are not acceptable, learns to focus on behavior as separate from self-worth," Healy tells Romper.

Mintz explains that parents can focus on the behavior that is unacceptable instead of negating the child's emotions to avoid creating self-esteem issues for their children. "It is OK for your child to feel angry and to express that anger, but it is not OK for your child to hit or throw objects," he says. "In that sense, we actually focus on the problematic behavior rather than the feeling. It is important for children to know that it is normal and appropriate to have negative feelings, such as sadness or anger — that there is nothing wrong with the child for feeling this way — but there are appropriate and inappropriate ways of discharging or dealing with those feelings."

"Parents and other caring adults need to make sure they explain to a child that they love them, but XYZ behavior is unacceptable. There is a separation between the fact you love them unconditionally and that a specific behavior (not them) is unacceptable," Healy says. "Also, parents need to remember that brain development isn't completed until a child is 25 or 26 years old and they are a work in process, which means they learn through experiences and feedback."

That is ridiculously comforting to hear as a mom who tries my best to ensure that my children are loved, but occasionally does say or do things like telling my son he is a "walking disaster." Oops.

Healy acknowledges that following through with this type of parenting process is harder than it sounds. "Our goal is always to love our children unconditionally (yes, sometimes it's easier than others) and guide them to make smarter choices. This sounds simple, but isn't easy. The path of growth is more like a squiggly line versus a straight one," she says.