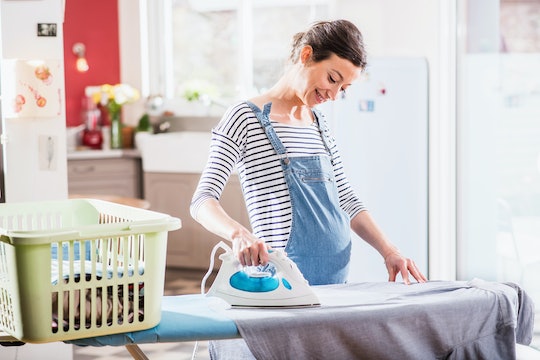 Have daydreams of closet organizing replaced your Swedish Fish cravings? Has the unrelenting urge to nap been replaced by a newfound energy that makes you think cleaning the baseboards sounds like an awesome use of your time? If you've been wondering how to know if you're nesting, chances are you're smack in the middle of this pregnancy phase if you answered "yes" to the questions above, or have similar excited feelings about preparing your home for the arrival of your new bambino.

Although nesting may be new to you, it's a primal practice that has been happening since procreation first became a thing. Nesting began as " nature’s way of telling us it was time to ready the roost and circle the support," according to HuffPost. The theory is that ancient pregnant ancestors couldn't outrun a predator and would be safer staying close to the cave, readying the dwelling for baby. Though collecting animal skin and soft moss has been replaced by disinfecting the home and stockpiling casseroles in the freezer, the concept remains the same. Of course, the impulse to organize, clean, and prepare may be hardwired into your DNA. But if it's not, and the following eight traits sound familiar, then you may be in the nesting phase of pregnancy.