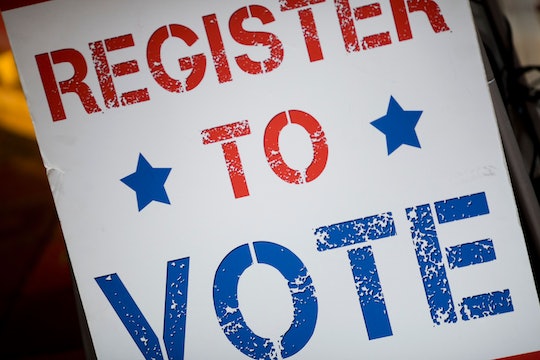 How To Register To Vote In Wisconsin, Because It's Crucial In This Voter ID State

After witnessing Hillary Clinton and Donald Trump have at it at the first presidential debate of 2016 Monday night, Americans clearly have a lot of #feelings. And that's great, as long as that political stirring translates into votes — but that's anything but a given, considering the relatively abysmal voter turnout rates that plague the United States. And the electorate in Wisconsin faces hurdles that transcend simple apathy, as residents will have to produce identification at the polls Nov. 8, and controversial new requirement that could curb participation. So, the first step to combatting laws that aim to disenfranchise some voters is to know exactly how to register to vote in Wisconsin, and go from there.

In March, Wisconsin enacted online voter registration, which makes signing up to cast a ballot easier, more accessible, and it all around great news — just not for this particular presidential showdown. Online voter registration has not been implemented in the state just yet, so Wisconsonites need to get all set up by mail or in person at a registration drive by Oct. 19. Coincidentally, that's the date of the final presidential debate, so if that's not the kick in the butt you need, then I don't know what is. But if residents of the state don't get fired up about voting beforehand, they can still register in person at their local municipal clerk's office all the way until Nov. 4.

Luckily, even though knocking out the whole process on the interwebs is not quite yet an option in Wisconsin, it will still be more or less a cinch for most people. If you meet the usual criteria (18 years old by Election Day, live in Wisconsin by Oct. 29, not on jail, probation, or on parole for a felony conviction, etc.), you can fill out and print the voter registration form, then mail it off to your municipal clerk's office. Easy. To get this done the old-fashioned way, in-person (are you even a #millennial?), head to the municipal clerk's office to get a hard copy of the form and turn it in there. According to Wisconsin Elections Commission officer Reid Magney, you can also register at your polling location on Election Day too, if all else fails. "You can do [this] if you’re a new voter, if you moved, or if you changed your name," he told Romper, in an email. (You can also print a form at http://myvote.wi.gov/ and bring it with you, if you so desire.)

For most people, that will be the end of the story. But the saga continues at the polls for people who cannot or have not obtained an ID, because showing one to vote is required in the state for the first time during a presidential election this year. After an appeals court ruling in August, potential voters in Wisconsin won't be permitted to attest to their identities in an affidavit in lieu of producing identification, The Washington Post reported, a compromise a lower court had previously approved.

Supporters of voter ID laws like this one argue they exist to combat voter fraud, a problem that, in reality, is not a problem at all. Opponents are convinced the laws, which disproportionately affect minorities and poor people, are targeted tactics to deny voters who would likely support Democrats the right to vote.

For every effort to discourage people from weighing in this election, there's another to make it easier for them to do so. That's why Romper and its sister site, Bustle, are teaming up a nonpartisan campaign called #OurVoteCounts to make registering to vote more effortless that Hillary Clinton's now-infamous onstage debate shoulder shimmy. Using the Rock the Vote widget embedded below, you can become one of the 100,000 women that Romper, Bustle, and a handful of other brands of outlets aim to register to vote throughout October. Residents of Wisconsin can simply fill it out and either mail or hand deliver it to their local municipal clerk's office; Those living in states that support online voter registration can simply send it off. Pretty cool, huh?

Yeah, I thought so too. When you're finished, go ahead and get the word out on social media too by using the hashtag #OurVoteCounts, and link to it at rtvote.com/bustle — because, especially in a state where some legislators are actively working to discount some residents' right to vote, it's imperative to do everything possible to ensure the actual voters reflect the makeup and interests of the people actually living there.