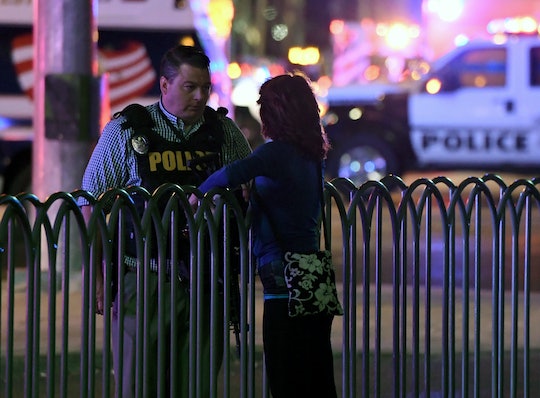 Here's How To Talk To Your Kids About Las Vegas

It's a topic that no parent ever wants to have to discuss with their children, but the latest mass shooting will likely mean that many children will have questions they'll need answered — and it won't be easy. Late Sunday evening, a gunman opened fire on a large crowd of concert-goers at the Mandalay Bay hotel in Las Vegas, killing at least 50 and injuring more than 400 others. According to The Guardian, the shooting has now taken over the dubious title of being the deadliest mass shooting in United States history, and that is a grim reality. Here's how to talk to your kids about Las Vegas, because gun violence in America is a topic too important to ignore.

As horrific as the news of the shooting is, the difficult truth is that mass shootings aren't nearly as shocking or surprising now as they once were. It's been barely more than a year, after all, since the previous most-deadly mass shooting occurred, when a lone gunman opened fire at the Pulse nightclub in Orlando in June 2016, killing 49 people. And it was far from being an anomaly: there was the San Bernardino shooting in 2015, where 14 people were killed, according to USA Today; the Sandy Hook shooting in 2012 that left 20 children dead; and the Virginia Tech shooting in 2007, where 32 innocent people were killed, to name only a few.

While shootings like these strike fear and grief in the hearts of all Americans, children are particularly vulnerable to struggling with their emotions in the wake of a tragedy, and parents play a really important role in helping them work through it. As for what to say and how to say it, experts agree that it all comes down to offering honest — but age-appropriate — explanations.

For young children under the age of about 8 years old, the best course of action may actually be to not mention it at all. As Dr. Deborah Gilboa explained to TODAY, younger children tend to have difficulty processing the concept of mass shootings, so bringing it up could just make things worse. The exception though is if you know that your child has already heard about it, or if you think they may see something or hear about it from somebody else. In that case, it will definitely be helpful to be the one to help explain it and give them a safe space to work through it.

The general consensus among experts seems to be that the younger the child, the simpler the explanation should be. According to PsychCentral, children around age 6 and younger can understand that a "bad guy" was angry and hurt other people, while older children might be able to handle more specific details. But no matter the age of the child, the focus shouldn't ever really be on providing information, but instead of reassuring them, and helping them to regain a sense of safety and security. Kids of all ages need to know, for example, that their homes and schools are safe places, and that there will always be adults around to protect them. Parents should also reassure their kids that any feelings they have are absolutely OK, according to The Washington Post, and help them express those feelings in appropriate ways.

But while being open and honest is important, parents will also want to make sure to continue to shield their kids from unnecessary exposure to upsetting images or details as much as possible. According to the Mayo Clinic, that includes being mindful of media exposure — even indirectly, like letting the news play on TV in the background while a child is playing. And, as Gilboa explained to TODAY, parents should be especially careful about their children seeing upsetting or graphic images, as they can stick in children's minds and cause greater anxiety about the situation.

If your child has already witnessed something upsetting, or is showing signs of being anxious or distressed over news reports, Gilboa said it can be helpful to counter that exposure with photos or stories of positive things, like all of the people who came together to help each other following the shooting. According to PsychCentral, it can also help to let children know that there are more good people in the world than bad people, and doing something to help the victims, like making a donation or even just making a thank-you card for the first-responders and other helpers, can help reframe the situation and give children back a sense of security.

Above all though, parents will want to make sure that they don't inadvertently make things worse by dismissing children's fears when they are trying to reassure them. As Hunter College child psychiatrist Dr. Robert H. Abramovitz explained to The New York Times, it's actually not particularly helpful to a child to hear their parent promise that nothing bad will ever happen to them — a promise that parents naturally want to make, but which is impossible to actually keep. Instead, Abramovitz suggests telling your child that it's natural to be afraid, but that you will do everything you can to keep them safe.

There's never any easy way to grapple with senseless acts of violence, and as parents, it can feel particularly shattering to know that we can't shield our children from it forever. But as the adults in charge of keeping them safe, it's important that we're there to help them process their feelings, and help them make sense of the images and details they do hear. Because while mass shootings shouldn't ever be a reality we have to confront, they happen all too frequently. And when they do, it's important to help our kids get through it as best we can.