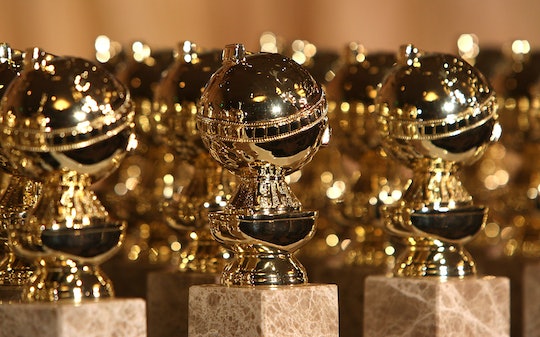 How To Watch The 2016 Golden Globes Nominations

Awards season is here! The Golden Globes nominees will be announced Thursday, and if you're wondering how to watch the 2016 Golden Globes nominations, the Hollywood Foreign Press has actually made it super easy for you. You can live stream the Golden Globes Nominations Announcement on www.goldenglobes.com at 8:15 a.m. EST/5:15 a.m. PT on December 10, 2015. The 73rd annual awards will be held on January 10, 2016.

As the nominations approach, speculation about who will make the ballot abounds. The Los Angeles Times made predictions for the Golden Globes motion picture categories, and it's an exciting year for women: they predict Jennifer Lawrence-led Joy, Amy Schumer's Trainwreck, and Grandma starring Lily Tomlin are all shoe-ins for Musical/Comedy. Their picks for actress: Jennifer Lawrence, Lily Tomlin, Amy Schumer, Sandra Bullock and Meryl Streep (though they still hold out hope for Melissa McCarthy, Tina Fey and Amy Poehler). In Drama, predicted actress nominees show the growing versatility of roles for women: from Brie Larson's character held captive in Room to Cate Blanchett and Rooney Mara's portrayals of women in love in Carol.

Variety predicted Golden Globes TV nominees, and many favorites are top contenders: Game of Thrones and Downton Abbey (in its final season!) for Drama, Orange is the New Black and Transparent for Comedy. Variety does think there may be room for newbies such as Aziz Ansari's Master of None and Tina Fey's Unbreakable Kimmy Schmidt in Comedy, though they're confident Better Call Saul will snap up a Drama nomination.

It's been an incredible year for women in movies and on television; it would be great to see Golden Globes nominations that honor all of these amazing entertainers.

More Like This
Here’s Everything You Need To Know To Watch The 2023 Puppy Bowl
Marcel The Shell Is Heading To The Oscars!
Pixar’s 'Turning Red' Is Nominated For An Oscar — Here’s How To Watch It Right Now
20 Incredible Movies To Watch With Your Family During Black History Month & Beyond
What Parents Are Talking About — Delivered Straight To Your Inbox