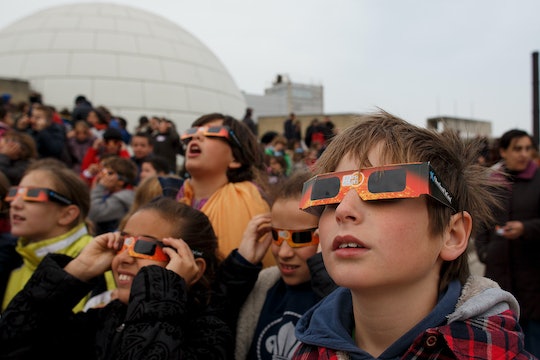 The 2017 solar eclipse is almost here. People all over the U.S. are already planning to bust out their stargazing blankets to see it. But if you're one of the geographically cursed, like me, here's how to watch the solar eclipse if you can't see it in your city. Don't worry, NASA has us covered with a sick live-stream.

Unfortunately for the rest of the country, optimum viewing of the solar eclipse is limited to those living within a narrow path of continental U.S., where the eclipse's shadow will sweep across from Oregon to South Carolina. Those areas of totality, wherein the moon will completely obscure the sun's rays, is expected to include only 14 states. Depending on where viewers are, they will be able to witness the effects of the eclipse for anywhere between a few seconds and a few minutes. As this will be the first total solar eclipse the world has seen since 1918, it is a once-in-a-lifetime opportunity that you won't want to miss.

If, for reasons of geography or viewing brevity, you will be unable to see the astronomical phenomenon in person, NASA has blessed us with a live stream of the 2017 solar eclipse. The next best thing to watching the shadow pass over your own location is to watch it live, recorded by the probably-super-high-tech cameras at NASA.

NASA is so high-tech, in fact, that viewers around the world can access a variety of images taken before, during, and after the eclipse by an impressive 11 spacecraft, a minimum three NASA aircraft, over 50 high-altitude balloons, and the brilliant astronauts currently aboard the International Space Station. The NASA website assures viewers that every one of these locations will be "offering a unique vantage point for the celestial event."

Along with videos and images, viewers will also be treated to expert commentary and presentations given by NASA scientists. The webcast of the event will last for hours — much longer than the puny two odd minutes of darkness that the "optimum viewing" cities can expect. That being said, even if you can watch the eclipse in your current city, you may still want to tune into NASA's broadcast for the added benefits. It can be watched through NASA Edge, NASA TV, Ustream, Youtube, and other platforms.

Of course, NASA will not be the only option for digitally viewing the eclipse. There are a number of other providers as well. Slooh, an online community observatory in Stanley, Idaho, is hosting an exciting three-day-long celebration of the event and is providing live coverage as well. The webcast can be viewed at Slooh.com or Space.com.

The last platform that I'll mention here (although there are still many more great choices) is Exploratorium. It is a science museum in San Francisco that is also planning to livestream the eclipse from two locations. Additionally, Exploratorium will feature a version of the livestream in Spanish; a telescopic view from Oregon and Wyoming; and a string quartet production to accompany the event.

Any one of these options would make an excellent alternative, or addition, to watching the eclipse firsthand. That being said, if a webcasts are not enough for you, there is always the option of taking a trip to one of the viewing locations. Many places are hosting special viewing events, and it would definitely be worth a drive. Regardless of how you choose to enjoy the eclipse, it is sure to be quite the show.