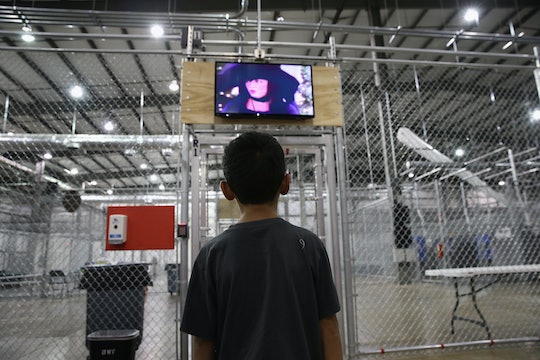 I Adopted My Kids from “Third-World” Orphanages — Where They Were Treated Better Than Child Refugees In The U.S.

The Trump administration wants us to believe that the immigrant children they've torn away from their parents at the border are being well cared for. But as the mother of internationally adopted children with an interest in child welfare, I’ve visited multiple orphanages overseas, and America’s child detention centers sound like far worse than anything I've seen what Trump once called the “sh*thole countries” of the Third World.

First-person accounts from inside these detention centers reveal a disturbing reality. Reports of children locked in cages and sleeping on concrete floors, not to mention an audio recording from ProPublica that caught a border agent joking as children sob, are horrific.

In an interview with MSNBC, Antar Davidson, a former worker at an ICE facility in Arizona, likened it to a private prison, staffed with undertrained, overstressed workers, and filled with terrified children. After visiting a Texas detention center, American Academy of Pediatrics President Dr. Colleen Kraft told The Washington Post that workers there aren't allowed to touch the children — not even to console them as they cry for their mothers. After news coverage led to a public outcry against family separations, Trump signed an executive order ending the practice, but thousands of children, already traumatized by family rupture, remain in U.S. custody, facing an uncertain future. The conditions in adult detention are, needless to say, no better.

My oldest daughter, now 16, lived in a New Delhi children’s home for the three years before my husband and I adopted her a few months after her fifth birthday. My son, also 16, and younger daughter, 15, adopted at ages 3 and 2 from Ethiopia, endured almost a year in institutional care.

I understand, in a direct and personal way, how institutionalization harms children.

The details of what my children experienced while institutionalized are not mine to share, but I can sum things up this way: My kids were lucky. They ended up in good orphanages — except really, there’s no such thing. I understand, in a direct and personal way, how institutionalization harms children. My job as an adoptive parent for the past decade has involved trying to undo the damage. Thankfully, my kids are thriving, but the future for the children in Trump's camps is uncertain.

No child lands in institutional care without having suffered some kind of loss or traumatic rupture in their family of origin; then, the institutionalization itself compounds the harm. Even the most competent, loving caregiver, working in the best possible facility, is no substitute for a lost parent. Childcare workers can’t provide consistent nurturing and support to individual children and still meet the needs of the dozens, or sometimes hundreds, of other kids in their charge. Attention, food, medicine, toys, education, and playtime in an orphanage are rationed, and there’s never enough of anything to go around.

In these frequently chaotic environments, where caregiver-to-child ratios are suboptimal and supervision is limited and imperfect, bad things happen. Studies consistently show that institutionalized children face an increased risk of emotional, physical, and sexual abuse at the hands of adults, as the World Health Organization has warned. Children in crisis sometimes act out the traumas they’ve experienced on one another. Children in out-of-home care are always vulnerable to a myriad of threats, even in a “good” facility.

Over the years, I’ve visited at least 10 orphanages in two developing countries. Some were better than others; all left me distraught. I will never forget the sadness I felt for an 18-month-old girl, lying alone on her back in an empty room, one leg in a cast from hip to ankle. I watched adults lose their tempers and smack tiny children with sticks or open hands, I overheard blistering, abusive tirades, and felt my stomach twist into knots as toddlers were herded into a nursery and locked inside, ostensibly to keep them safe.

Yet, in those same children’s homes, I also observed moments of joy, kindness, and love: children comforted as they cried; kids rejoicing over gifts of candy and new clothes; small friends laughing together; a nurse cradling a desperately sick infant. The caregivers I’ve met during my travels appeared committed to doing the best they could, despite limited resources and challenging circumstances. Still, the care that even the best orphanage can deliver is far less than what every child deserves as a basic human right.

Here in the United States, detention centers for immigrant children are being run for-profit by private companies that have secured federal contracts.

Most of the orphanages I’ve visited were operated by religious groups or NGOs, led by people with backgrounds in education, child development or healthcare. The worst facility I saw was an overcrowded, government-run institution in India, but even there, I met dedicated caregivers.

Here in the United States, detention centers for immigrant children are being run for-profit by private companies that have secured federal contracts. Dr. Kraft told The Washington Post that she believes that employees in these detention centers are striving to meet the needs of the children in their care, but are constrained by policies like the no-touch rule. Now we’re learning that the government is sending infants and toddlers to “tender age” institutions. Are those babies being held and comforted, nurturing that’s vital to their survival?

The notion that children require and deserve special care and protection to ensure their healthy physical and psychological development is a modern one. The concept of child welfare as a collective, social responsibility gained significant traction in America during the 20th century. According to The Adoption History Project at the University of Oregon, U.S. adoption regulation and policy arose from the idea that if a parent is unable to properly care for their child, society must step in to find that child a new home and family that will meet the child’s needs.

International adoption programs sprang up after World War II to serve destitute war orphans from Japan and Germany, many of whom were the unidentified or abandoned offspring of American GIs. Subsequent waves of inter-country adoption by American families occurred in response to perceived child welfare crises in countries such as Korea, China, Vietnam, Romania, Russia, and Ethiopia. Although adopting a child is always an act of self-interest on the part of the adoptive parents, some growth in inter-country adoption programs also stemmed from compassion, an American impulse to rescue children from other countries seen as destitute and alone. My husband and I, perhaps with some naïveté, chose to form our family through adoption for humanitarian reasons.

Despite everything we know about child development and welfare, we find ourselves at this perilous historical moment where the United States government is ripping children from their parents’ arms.

As generations of adoptees have reached adulthood, the problematic nature of America’s rescue narrative has been revealed, and ethical lapses in both domestic and inter-country adoption have been exposed. Today, child welfare experts recognize that family preservation — providing support and resources to help biological families stay together — should always be prioritized ahead of institutional care, foster care or adoption.

And yet, somehow, despite everything we know about child development and welfare, we find ourselves at this perilous historical moment where the United States government is ripping children from their parents’ arms.

Instead of trying to “save” orphans, Trump is effectively creating them, incarcerating children in tents and abandoned Walmarts, recalling a dark time when the concept of child welfare didn’t exist. Currently, there is no plan for reunifying children and their parents, the former of whom have already been transported as far as New York state in some cases.

Immigrant families of color are being destabilized, their children exploited for political gain, just as they were in the eras of slavery, Native American subjugation, and Japanese internment. The enormity of this regression is terrifying. Our country has always been imperfect, but this is not the same America that welcomed my children here as immigrants a decade ago.