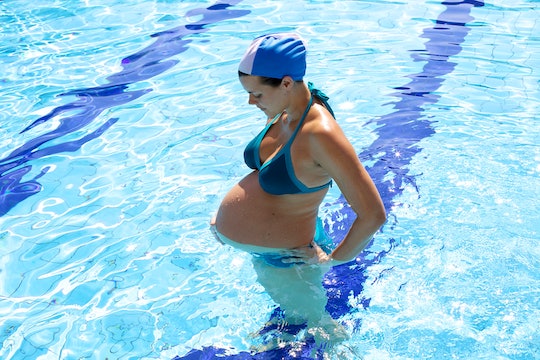 I Tried To Flip My Breech Baby Using Handstands, & *Voila*

Pregnancy is like a nine-month journey into the unknown. You know there’s a baby in there, but beyond that, it’s a bundle of questions: Will I get past the first trimester? Is it a boy or girl? How big is it? Are all of these endless tests going to turn up something unexpected? My second journey into the unknown wasn’t super eventful, though it had some minor complications: a low-lying placenta (that eventually righted itself), a little excess amniotic fluid (which turned out to be no biggie). One thing I didn’t anticipate was my unborn son’s horrible sense of direction. At 39 weeks, my baby was breech (again), so I tried to flip him.

Here's how it went down.

At 34 weeks, his head was heading south like a cooperative little baby. Then he inexplicably flipped to breech and then back again within a 10-day period. By then I figured I was in the clear, but at week 39, my OB informed me during an ultrasound that the baby had flipped to a transverse (sideways) position. Evidently, my unborn son was more interested in training for the 2036 Men’s Olympic Gymnastics team while still in utero than making a traditional entrance into the world. Either that or he didn’t know which way my vagina was.

“I want you to come back and see me on Monday and we’ll check on him again,” the doctor told me. “If he’s still transverse, we’ll do a c-section on Tuesday.”

It was Friday. This was getting real, really quickly. Then the doctor mentioned there were exercises that could possibly make the baby turn on his own: I could float around in a pool or assume the Muslim prayer position as often as possible until my next appointment.

Really? I thought. That’s a thing? Has it ever actually worked?

As I listened, I was thinking that actual praying might have the same success rate. He assured me these exercises couldn’t hurt so I figured why the hell not. Having a c-section wouldn’t be the end of the world, but I was really hoping to avoid it if I could.

How long was I supposed to stay like this? Minutes? An hour? I forgot to ask. I decided on five to 10 minutes, and assumed the position morning and night for three days.

We have a lovely town pool, and that Saturday, my husband, daughter and I went for a baby flip-dip. To say I felt like a whale at 39 weeks pregnant is the understatement of the millennium. I hadn’t bothered to buy a maternity bathing suit, so I was rocking a bikini that I’d managed to stuff myself into, along with one of my husband’s extra-large and very opaque t-shirts to cover up the whole situation, because honey, no one needed to see all that. I thought about my friend who’d kindly offered me the use of her own pool, which I’d turned down, telling her, “No worries, we have a pool in our town, it’s all good!”

What the hell was I thinking? Yeah, yeah, yeah, I know a pregnant body is a beautiful thing, but when you’re nine months in, the last thing you want is for people to see you with very little clothing on.

I gingerly stuck a toe into the pool. My daughter, already happily splashing around, giggled. “Mama, are you going to jump in?” Um, no. I lumbered into the pool, excruciatingly conscious of everyone’s eyes on me, when, of course, no one was even looking twice. OK, I thought to myself. Commence Operation Baby-Flip!

My husband, concerned either for my safety or that of the small children around me, hoisted me up and started carrying me around the pool. “Stop it!” I screeched. It must have looked like one of those videos where good Samaritans attempt to lever a beached whale back into the ocean using leaf scoopers. He put me down and I slowly made my way around the pool in a beleaguered beluga breaststroke. I willed the baby to turn. Come on, little buddy, I thought. Help your mama out. I’ll buy you a puppy.

In a misguided attempt at solidarity, I tried to do a flip in the pool, figuring he might flip in turn if I did. As I flailed and listed sideways, I learned the aquatic impact of 45 extra pounds added to one’s hull. Back to the breaststroke.

I savored the tranquility of the pool while my daughter and husband swam and splashed nearby.

When my husband and I got to my OB’s office, he pulled out the ultrasound wand and we held our breath.

That afternoon, just in case the aquatic therapy hadn’t worked, I got down on my knees and pressed my head and hands on the floor, while facing my makeshift mecca, the television. I hoped I was doing it right. How long was I supposed to stay like this? Minutes? An hour? I forgot to ask. I decided on five to 10 minutes, and assumed the position morning and night for three days.

When Monday rolled around, I was pretty confident the baby hadn’t turned. I’d felt nothing other than the usual kicking all weekend, and was mentally preparing myself for a c-section. On the off-chance the little guy had updated his Google Maps app, I packed a bag.

Maybe he turned, I told myself hopefully. Then you can get induced and have him the old-fashioned way. My inner voice responded, Dream on. If this baby has your sense of direction, you’re S.O.L.

When my husband and I got to my OB’s office, he pulled out the ultrasound wand and we held our breath. My doctor smiled. “Good news! He’s head down.” I nodded, in mild shock. The doctor continued, “I’m sending you to the hospital right now to get induced before he flips again.”

While I’ll admit that my first thought was, “Dammit, I was going to get a mani this afternoon,” I was also thrilled that my son’s neonatal navigation system was back on track. My husband escorted me to the hospital, we checked in, and within 90 minutes, the induction began.

Nearly two very long days later (that’s a story for another day), my son came out happy, healthy and head-first. The doctor who delivered him even joked that he didn’t think I was actually pushing because the baby seemed like he was “swimming” out of me. I looked at my husband and winked. Maybe baby’s first swimming lesson at the town pool had paid off. Look out, Michael Phelps!