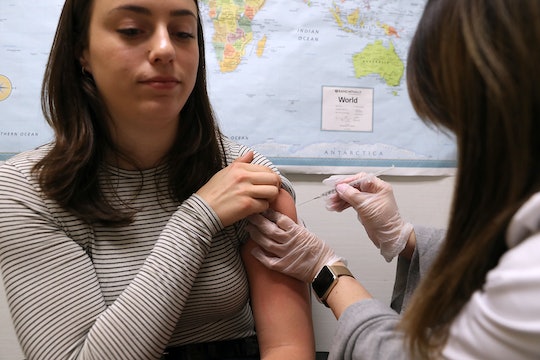 Recently, there's been as much conversation happening about the possible side effects of the flu vaccine as there has been discussion surrounding the flu itself. There are a lot of misconceptions out there about the flu shot, and what it means for you as a patient and as a parent. If you've recently decided to go ahead with the yearly vaccine, you might wonder, given all the rumors, if you get flu-like symptoms from the flu shot, are you contagious?

Simply put, if you experience flu-like symptoms as a side effect of the flu shot, they should resolve quickly and be far less severe than the actual flu itself, according to the Centers for Disease Control and Prevention (CDC). These symptoms range from a low-grade fever to muscle cramping, to nausea, and even a headache. If the symptoms you're experiencing are side effects of the vaccination, you are not contagious. The flu vaccine is not a live virus vaccine like the inoculation for smallpox, and therefore does not make the virus communicable from person to person due to the vaccination.

However, that doesn't mean that you can't get the flu around the time of inoculation. If that happens, and you begin to experience flu-like symptoms, then, of course, you are very contagious. According to the CDC, the vaccine takes approximately two weeks to provide protection from the flu, and with an effectiveness rate this year of around 30 percent, the flu can and does happen.

The trick is paying close attention to your symptoms. The CDC warns that the side effects of the flu shot somewhat mirror the symptoms of the flu, but the severity and duration are far different. While you might get a low grade fever and experience some nausea and a headache from the jab itself, the flu knocks you for a loop, hard and fast. I was the unfortunate recipient of the flu virus this year, and believe me when I tell you, you know when you have the flu. I threw up, I had chills so badly my body felt like it would never get warm again, and my head felt like a team of rabid ferrets were fighting on the inside of my skull. My fever was nearly 102 degrees Fahrenheit, my muscles hurt, my skin hurt, and even my hair hurt. It was extreme.

I'm also known to develop some unpleasant side effects from almost every vaccine I get — including the flu jab — and I get a lot of shots. When your husband is a police officer and you have two kids in school, as well as being in school yourself, you make sure to get all the requisite boosters. I get the flu shot every year as soon as it's released. When I do, I get a relatively unfortunate migraine, my arm is super sore, and I get a bit dizzy when I get jabbed. But, I would experience that 100 times over before ever volunteering to get the flu again. However, if you get the shot, and you notice swelling of your mouth, tongue, or throat, trouble breathing, if you're feeling particularly weak or devoid of color — these are signs of a severe reaction, and you need to be treated immediately, according to the CDC.

So, if you get flu-like symptoms from the flu shot, are you contagious? No, not unless you've somehow contracted the actual flu. Those vaccine symptoms aren't fun, but the real flu is so much worse. Thankfully, even if you do get the flu, according to the American Society of Microbiology, getting the flu shot likely shortens the duration of the flu and reduces the severity of your symptoms. My lab partner in graduate school just got over the H3N2. She's had it for two weeks, and she did not get the vaccine. I had it for five days, total. Also, her symptoms made mine look pathetic and weak. The CDC recommends everyone still get the shot if you haven't done so already, because the season is long, deadly, and has yet to reach its peak. Maybe you'll even get a cool Disney bandaid. I know I did.