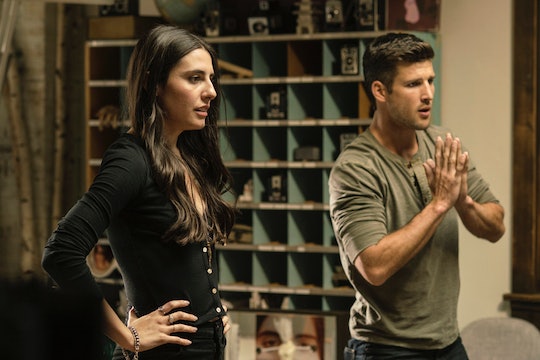 Why 'Imposters' Will Be Your Next New Obsession

Bravo's newest scripted series, Imposters, airs on Tuesday, Feb. 7 and it's sure to be a wild ride. The show follows a mysterious woman who cons multiple people by getting them to fall in love with her before taking everything they own. For Marianne Rendón's character, Jules, this women is her ex-wife CeCe, who left two years before the show begins. Romper had the opportunity to chat with Rendón about the new show and she shared a few Imposters Season 1 spoilers that prove it's bound to be your next new obsession.

According to Rendón, Jules is a struggling artist who came from "a very privileged Connecticut upbringing," and when the show begins she's been in intensive therapy for the past two years after being conned by CeCe. Though Rendón claims Jules has taken "fundamental steps in terms of taking care of herself" she's still very fragile from what happened. Jules had never felt the level of acceptance she felt with CeCe, which is why CeCe's betrayal was so detrimental to Jules, and also why she kind of has to believe that CeCe's love for her was real.

Rendón herself, however, doesn't really know if CeCe ever actually loved Jules, but she does think at least some of her feelings for Jules were real. "I feel like to be a good con [artist] you have to lie to yourself, you have to believe you're really feeling these things to really sell," she says. So does that mean we'll get to see what their dynamic was like during the actual con rather than just the aftermath? When asked about the possibility of flashbacks between CeCe and Jules on the show, Rendón played coy, simply stating: "You definitely get a better sense of who CeCe is throughout the season, yes."

Despite Jules' "fragile" state, Rendón also described her character as really "zany and silly" and fans can expect to see a lot of funny moments between her and the other main characters, Ezra Bloom (Rop Heaps) and Richard (Parker Young), who were also tricked by CeCe. The pair go to Jules to get her help in tracking CeCe down and the trio team up to get revenge. As far as what they're overall goal is once they do track CeCe down, Rendón said they're not even totally sure themselves. "I think all of them are unsure what [finding CeCe] will actually do to them," Rendón explains. "I think they all have their own intentions for wanting to see her. I think deep down Jules thinks she might have a chance with her. I think they all project their idea of who that person is onto her."

While the three each struggle with their ideas of CeCe, they also get into a lot of sticky situations, which is what Rendón says makes the show so surprisingly funny. "There's dry witty banter comedy, there's slapstick comedy, [and] it's a very funny show," she reveals. "At least all the crazy things that the three of us pull off."

Although there are many funny moments, Rendón also guarantees the show will be filled with twists and turns up to the final moments of the first season, so you can expect a cliffhanger by the time the finale rolls around. There's no word yet on whether or not there will be a second season, but the show already sounds like the perfect dramedy that will make fans immediately want more.

The series premiere of Imposters airs on Bravo on Tuesday, Feb. 7 at 10 p.m. ET.