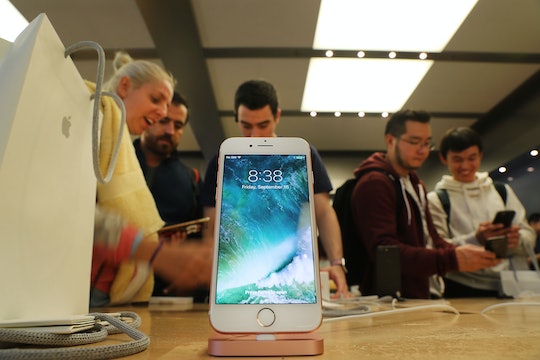 Apple May Be Rolling Out Wireless iPhone Charging

We may be months away from the day that Apple CEO Tim Cook makes the official announcement about what features to expect from the next generation of iPhones, but that doesn’t mean that users should stop obsessing. And while the company has remained silent when it comes to details on the iPhone 8 (or will it be iPhone X, as in 10th anniversary?), several outlets reported Monday that a quiet update to a business group’s website could signal big changes for the iPhone 8. It sounds like the iPhone 8 may have wireless charging capabilities, which may mean much more convenience for users — and a slightly bigger price tag.

While speculation around new features isn’t unusual, according to The Independent, rumors about a wireless charging feature took on greater weight when the company was added to the list of members of the Wireless Business Consortium, the group that sets the standards for wireless power technology and ensures that the devices are able to work together. The Independent noted that while membership in the consortium doesn’t guarantee that the company will take its use of the technology to another level — Apple already uses a version of wireless charging for the Apple watch — it’s a good sign that the company is starting to take user interest in wireless tech more seriously.

And it’s a good sign that the next version of the iPhone will be a serious departure from previous models. Fast Company is among those reporting rumors that the next version of Apple’s flagship smartphone will be a more futuristic design: no physical buttons (nope, not even a Home button), a glass back instead of metal, and as close to an edge-to-edge display as its designers can manage. MSN.com reported that among the updates expected in the iPhone 8 are a slimmer connection type, which would add to the sleek design but would certainly mean the headache of adaptors and connectors needed to make older accessories work with the new phone. And since the phones would be a step ahead of current wireless charging technology, The Independent reported, it should be possible for users to charge the new iPhone without it ever leaving your pocket.

So, what’s the bad news? All that next-level technology is likely to bring the iPhone 8 to a much higher price point than prior models. Fast Company cited anonymous sources placing the final price tag at above $1,000.

Still, the company is working hard not to give away too many details this early in the game. According to The Independent, when asked about its membership in the Wireless Business Consortium, representatives for the company demurred, saying in a general statement that Apple is "an active member of many standards development organizations, as both a leader and contributor" and that it had joined the group "to be able to participate and contribute ideas to the open, collaborative development of future wireless charging standards.”

The new iPhone is expected to be released sometime in September 2017.