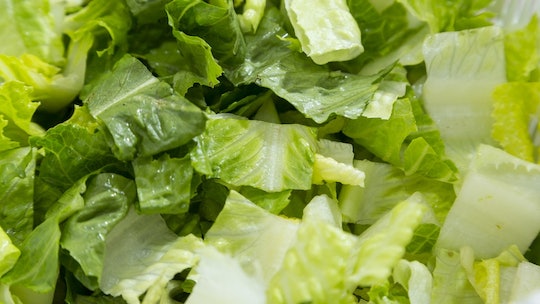 Among all of the national horrors that occurred in 2018, perhaps most insulting among them was that between the months of October and December, the Center for Disease Control and Prevention (CDC) identified that there was a bacterial outbreak in some nationally distributed lettuce, rendering your lunchtime salads unsafe to eat. But, it's January, so is romaine lettuce safe now? The update on the E. coli outbreak from the CDC gives the green light (pun intended).

U.S. officials have declared the end to the threat of the food poisoning outbreak, CBS News reported on Jan. 10, explaining that none of the potentially contaminated greens should be available for purchase anymore.

After the network reported that 62 people in 16 states were made sick from the infection, the E. coli contamination was traced back to one particular farm in California, as well as in the areas of Santa Barbara, Monterey and San Benito.

The issue, of course, is that these foods are nationally distributed. After almost three months of being on recall, the CDC is saying that the "contaminated lettuce that made people sick in this outbreak should no longer be available" as it has been contained and is no longer a threat.

So yes, this means you can go back to getting romaine on your Chipotle burrito bowls.

Of course, this does not mean that any romaine lettuce that you purchased in October-December of last year is necessarily safe. It's still advised that you throw out anything that you may have purchased and potentially froze. (Who would freeze lettuce? Regardless, toss it.)

The CDC also offered a bit of advice on how to avoid or eliminate the spread of E. coli infections.

Though the risk appears to be over now, it's still good to have a plan in case you do end up exposed to a contaminated food. What do you do if you've eaten something that could be infected with E. coli?

The Mayo Clinic explains that you should first be on the lookout for the classic symptoms of an E. coli infection, which are "diarrhea, which may range from mild and watery to severe and bloody, abdominal cramping, pain or tenderness and nausea and vomiting."

Then, if the diarrhea or bleeding does not cease, you should contact a doctor immediately. In some cases, E. coli infections do require hospitalization for treatment, but not in all cases. At its most extreme, the infection can be fatal. (This is rare, but it does happen.)

Regardless, it's always best to err on the side of caution, stay up-to-date with any food-related notices or recalls, follow officials' instructions, and seek advice from a doctor whenever you're unsure.