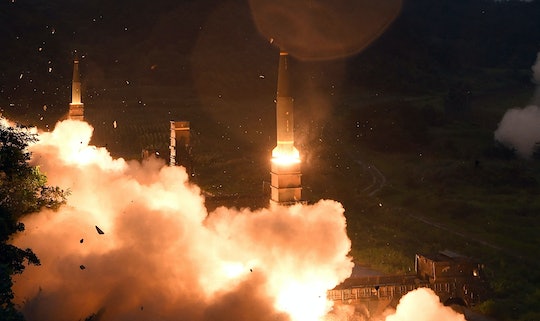 For decades, the United States has been the target of idle threats from North Korea, and they've generally been taken about as seriously as a fly buzzing around one's face. But recent North Korean weapons tests, coupled with escalated peacocking by the leaders of both nations, has caused people around the world to wonder, is the North Korea nuclear bomb threat real? This is really a two-part question, but regardless of whether North Korea can hit the United States with a nuclear missile, the real issue is if it actually will.

Technically, the two countries have been somehow in conflict since 1950, when the Korean War hostilities ended with the signing of a temporary truce in 1953, rather than a peace treaty. The United States was once so unconcerned with North Korea's power that it created an actual genre of lowbrow comedy films designed to irk the country's leaders. So what happened? Simply put, North Korea might actually be able to fight back now. Following two nuclear bomb tests last year and two missile tests last month, the Washington Post reported on Tuesday that North Korea has successfully miniaturized a nuclear warhead capable of being carried by missile. This prompted President Donald Trump to go on the offensive, both on Twitter and off.

A spokesman for the Korean People's Army then threatened military bases on Guam, and perhaps even the U.S. mainland, according to Reuters, but it's no secret that North Korea's military power is far outmatched by the U.S. military, even without factoring in its many allies. U.S. intelligence officials estimate that North Korea has 20 to 60 nuclear weapons, according to CNBC, whereas the United States has 6,800. And even if the KPA has succeeded in creating miniaturized nuclear warhead, there's no evidence that it's been able to design a missile nosecone that could make it through the Earth's atmosphere intact.

If North Korea did attack Guam, there are more than 80,000 U.S. troops stationed in South Korea and Japan, according to the Guardian, and regular U.S. B1-B bomber flyovers and casual drop-ins by fleets of warships serve to remind North Korea that the U.S. military is standing at the ready. But if North Korea isn't actually looking for a fight, why not heed the call to stand down? According to several academics who spoke to the Guardian on the subject, what Kim Jong-un really wants is a seat at the table. He doesn't want to use his nukes, he just wants to have them, which would force the United States, and the rest of the world, to recognize North Korea's legitimacy and establish diplomatic relations. Imposing sanctions won't stop him, the experts cautioned, nor will any amount of blustering. If Trump wants North Korea to stop building its nuclear arsenal, he may have to do what he claims to do best: sit down and make a deal.