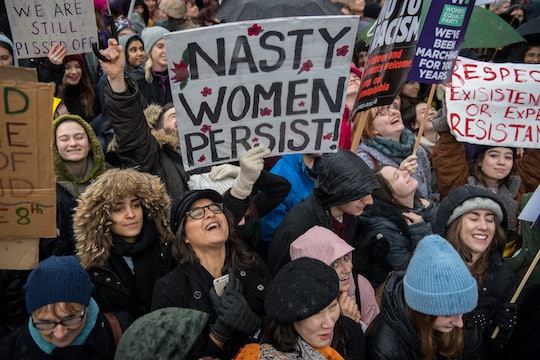 Women everywhere are gearing up for the 2019 Women's March on Saturday, Jan. 19, especially in major cities within the United States. For the third year in a row, American women are expected to storm the streets of their hometowns in solidarity against the endless list of things that are wrong with today's society — including gender equality, women's rights, etc. With a country-wide event like this about to go down, many people are wondering: Is there a Women's March In Houston, Texas? The good news is that, like most major cities, Houston is planning to participate in the annual rally.

For Texas natives who plan to make Houston their Women's March location, the activities begin as early as 8:00am, according to the Houston's Women's March website. For the first two hours, participants will have a chance to mingle with their fellow marchers and get pumped up for the day. There will be food, t-shirts, music, speakers, and portable bathrooms available for everyone, too, according to the website.

An estimated 20,000 to 25,000 people are expected to join the march on Jan. 19, as reported by the Houston Chronicle. Through social media, the Houston Women March On team has been putting call outs for volunteers and supply donations, as well as sharing different ways to join the tens of thousands of voices who will be rallying.

In one post on Facebook, Houston Women March On shared information about a large bus traveling from an outside area to/from the march on Saturday.

For 2019, Houston Women March On has set a theme for the rally: March On Justice. "What does justice look like for you?" the official site reads. "We're inviting organizations working for justice regarding violence, ethnicity, gender, the criminal justice system, age, health, education, socio-economic and wage gap, housing, immigration, environmental, representational democracy (anti-gerrymandering!), and more. During the 2019 Houston Women March For Justice, you'll have the opportunity to join thousands of people to take actions for justice, and to learn how help people and organizations in our region."

For those of you who are in the Houston, Texas area but can't make the march, fear not — there are plenty of other ways to help support the cause. To start, you can donate any amount to the Houston Women March On organization. All donations are tax deductible and go towards the coasts of the march, including supplies, bathrooms, etc.

If donating isn't enough for you, there is plenty of gear on the official website up for grabs. Most t-shirts are around $20, but there is also other Women March On gear like hats, bags, fanny packs, and even a bottle opener.

The Women's March will take place in multiple cities across the nation on Saturday, Jan. 19.