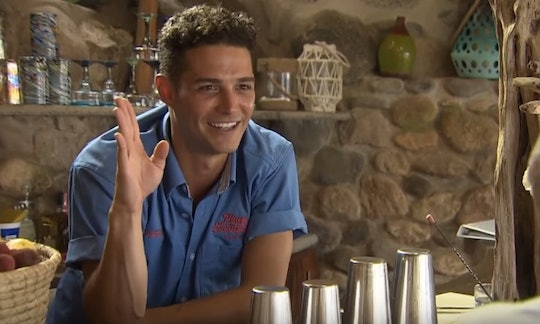 When you are asked who your favorite contestant in Bachelor Nation is, I'm sorry to tell you that there is only one correct answer and his name is Wells. So naturally, what everyone wants to know is whether or not Wells is single after Bachelor in Paradise Season 4. The rumor mill has been positively abuzz about what exactly the deal is with him and Danielle M. So you should probably pay attention before you run off and buy a plane ticket to Nashville to get your man.

Though he was a fan favorite, the powers that be at ABC decided not to tap Wells as the next Bachelor, which I will never understand. However, it doesn't look like it's because there's a special someone waiting for him back at home. Or is there? Right before she left Paradise, Wells caught up with Danielle M. to give her the most romantic, heart-tingly smooch that has been seen yet on this season. He was there as the bartender, not to go on dates, so it was especially surprising. Although considering the history between the two, perhaps not that surprising at all. Wells and Danielle actually knew each other way before they both decided to go on Bachelor shows.

In an interview with Glamour, Wells clarified his relationship with Danielle, who he adorably refers to in Instagram posts as "Danny" (awww). The two had been friends in Nashville for years, and went on a date once, though nothing ended up coming from it. When asked if there's hope for the two of them, Wells did not play coy. "Yes, there’s definitely hope for us. Everyone needs to put everything into perspective, though," he said. He explained while there definitely might be a future between them, it needs to come about naturally.

However he was very clear that they talked "for like hours" after she left Paradise and they both decided that they would figure things out once she'd gotten back to Nashville. "Before this, we used to go out all the time and we were just friends. We’d go to shows together," he said in the same interview. "Now when you go out, it’s a little weird because people recognize us and assume something. That just makes things awkward. So there are a lot of questions that need to be answered internally between us before we figure out what’s going on."

So basically, Wells is definitely single for right now. But he could be in a relationship with Danielle any minute now.