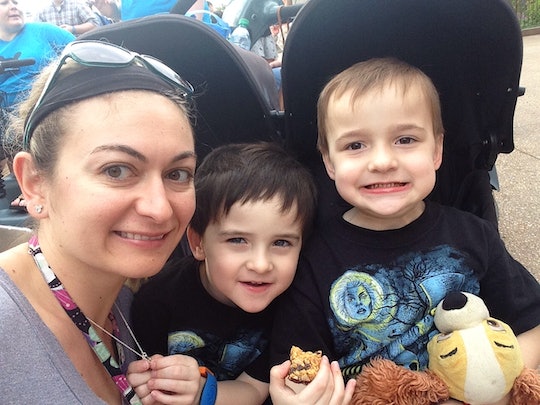 I'm So Glad I Donated My Unused Embryos To Science

My partner and I talked about many things when deciding to try IVF in order to have a family — the expense, the physical toll it would take on my body, the emotional pain we'd endure if the procedure didn't work — but in all of our discussions, how the president would feel about our family planning choices didn't ever cross our minds. That was five years ago. If we were starting the IVF process right now, I'd be terrified about the idea of having unused embryos on hand in Trump's America.

Four years ago, when I was 27, I was diagnosed with premature ovarian failure. The good news was that I would never get my period again. The bad was that there was no way I could get pregnant without significant medical intervention. Anything my partner and I did between the sheets would be for recreational purposes only.

We pursued IVF and were lucky enough to end up with 12 embryos at the end of the cycle. Two of the best quality eggs were implanted into my uterus, and the rest were frozen as backups. The procedure worked perfectly and I gave birth to fraternal twin boys, who just turned 4 years old last month.

I always wanted two children, and so did my partner, so when the annual storage bill for our iced embryos came when our sons were 1 year old, we decided we would rather take that $600 and put it towards the boys' college funds instead. We had the option of simply having the embryos destroyed, but instead we signed forms allowing the embryos to be used for stem cell research, our way of giving back to the scientists who helped us become a family.

Truthfully, there has always been a tiny part of me that wasn't 100 percent thrilled with the fact that we got rid of our unused embryos. Not because I had any lingering doubt over the moral decision behind destroying the embryos, just because I wasn't sure I was done having kids. Although I know deep down that not having another baby is the right choice for me, the older my boys get, the more wistful I am for the newborn days. I worried that one day I'd want another child.

But that was before Trump starting signing executive orders faster than J.J. Abrams signs autographs at a Comic-Con panel. Based on the statements Trump and Vice President Pence have made about pregnancy and abortion, I'm actually very relieved we made the decision regarding our unused embryos already because I'm not sure I'd be guaranteed the same freedom of choice going forward.

A recently introduced bill known as the "Sanctity of Human Life Act," aka H.R. 586 is attempting to have fertilized embryos declared people, even outside of the womb. If this bill passes, the decision on what to do with unused embryos will no longer belong to the adults who pay for and endure the medical procedures necessary to create these embryos, but rather lawmakers who speak on the behalf of a mass of cells.

Speaking at the March for Life Conference recently, Vice President Pence made it clear that he takes an extremely broad view on when life begins: "Life is winning again in America," he said during a speech at the march. "That is evident in the election of pro-life majorities in the Congress of the United States of America. But it is no more evident in any way than in the historic election of a president who stands for a stronger America and a more prosperous America and a president who I proudly say stands for the right to life — President Donald Trump."

For someone like me, with 10 unused embryos, this would mean finding $25,000 to fund five more FET cycles or transferring more embryos than is safe for me in a single round, in hopes of saving some cash.

Last month, while the media was still talking about the size of the crowds at the inauguration and all those pink p*ssy hats that stormed the world the day after, some Republicans took a sneaky step towards declaring embryos to be "people." Without much fuss or fanfare, Georgia Rep. Jody Hice and approximately 20 other House Republicans introduced HR 586.

Knowing this bill is now on the table to possibly become law terrifies me. What if we hadn't made the decision to donate our embryos? What if we wanted more time? What if we weren't ready to decide yet? What if, what if, what if? With the introduction of this bill, the Trump administration is trying to make it illegal to destroy existing embryos on the grounds that they're "life," even if they're not inside a woman's body.

I wonder what I would do if I had unused embryos in storage if this bill became law. Could I afford to store them indefinitely? Perhaps, though the idea makes me sick. It'd be a waste of money I could otherwise use to support the children I actually have in existence on this planet, instead of theoretical ones currently existing as just a bundle of cells. Plus, it would be a waste of resources, like electricity, to keep the embryos frozen when I have zero intention of ever using them. And beyond that, having embryos permanently in storage feels a little like Black Mirror's creepy "San Junipero" episode to me. Even if the current administration defines an embryo as "life," life isn't supposed to last forever.

Abolishing abortion would effectively limit a woman's options regarding her own family planning by forcing her to carry an unwanted pregnancy on the grounds that an embryo is "life." Making a woman carry all her IVF embryos is just a different way doing the same thing.

While campaigning, Trump said he believed there should be some form of punishment for women who have abortions. He didn't go into the specifics of what that punishment should be, but if you're going to force women to carry unwanted pregnancies, it seems plausible that you would also force women to implant every embryo that's created during a round of IVF. That would mean having to decide between doing a painful and costly round and only harvesting a couple eggs, eggs that might not fertilize or be of such a low quality that they're not candidates for implantation. Or, you'd have to harvest all the eggs and try to create as many embryos as possible, as is the standard practice, but you'd do so knowing that at some point you'd be forced to implant them all, perhaps having more children than you originally wanted.

A round of frozen embryo transfer (FET) costs about $5,000. Most doctors won't transfer more than two or three embryos at a time out of health concerns for both mother and the fetuses, especially if you've had success using IVF before. So for someone like me, with 10 unused embryos, this would mean finding $25,000 to fund five more FET cycles or transferring more embryos than is safe for me in a single round, in hopes of saving some cash.

For as hung up as the current administration claims to be about "protecting" balls of genetic material, they don't seem to be willing to spend anything to do so. Despite all of the pro-life and anti-abortion comments coming from the White House and Republicans, there hasn't been an visible plan put forth for helping families who can't afford to raise the children they'll be forced to have in the event that these laws go through.

I'm already in significant debt, thanks to my graduate school loans, and I can't stomach the thought of potentially having to add to that debt thanks to medical bills for IVF transfers to bear children I don't want to have.

A scenario where people who have IVF are forced to implant all their embryos isn't far-fetched as it sounds. Abolishing abortion would effectively limit a woman's options regarding her own family planning by forcing her to carry an unwanted pregnancy on the grounds that an embryo is "life." Making a woman carry all her IVF embryos is just a different way doing the same thing, and H.R. 586 sets the groundwork.

I'm already in significant debt, thanks to my graduate school loans, and I can't stomach the thought of potentially having to add to that debt thanks to medical bills for IVF transfers to bear children I don't want to have. While my children were very much wanted and planned for, being pregnant wasn't easy for me. I had several complications during pregnancy, including a rare condition known as cholestasis and a close call with premature labor. I spent the last two months of my pregnancy on bed rest. The sacrifice of my own health, my body, and even my time was difficult but worth it when I was invested in the pregnancy. But what made it possible to grit my teeth when my hip was screaming from laying on my side for so long or what helped me stay sane when I was starting at a blank hospital room wall for weeks on end was knowing that this was what I wanted. The choice was mine, and mine alone. Having that control over my body is what helped make the hard parts of my pregnancy tolerable. I can't imagine being forced to do it against my will.

That's why I'm so grateful I already made the decision to donate my unused embryos to science. There's the chance they were used to further scientific research, possibility even to help other women like me with fertility issues. But even if every single experiment my embryos were used in was a complete dud, I have the relief of knowing I'll never be forced to do something with my body against my will. Right now, there is no greater gift.

Of course, there's always Pence's go-to alternative to abortion that could be made to apply to unused embryos: adoption. Pence has pushed a "just adopt" message, oversimplifying the issue by presuming every woman who becomes pregnant has the financial means to care for herself throughout a pregnancy, or wants to give up body autonomy for 10 months. If the people in charge of our government think it's no big deal to force a woman to carry a pregnancy to term in order to give the baby up for adoption, coming to the conclusion that unwanted and unused IVF embryos should be given up for adoption isn't even a stretch, it's a tiptoe. There are existing embryo donation programs already for couples who want to gift their unused embryos to other infertile couples, and while that's a fantastic and noble gift for someone to give, it should be their choice to make, not a government mandate.

H.R. 586 sends a clear message to anyone going through or beginning the already stressful path of infertility treatments. It says, loud and clear, "You don't have a choice." And if that wording wasn't already clear enough, the SCOTUS nomination of conservative Judge Neil M. Gorsuch is an yet another indication that the Trump administration will do whatever it takes to make good on his threat to repeal Roe v. Wade.

I'm just relieved I won't be forced to have any more children here to witness it.