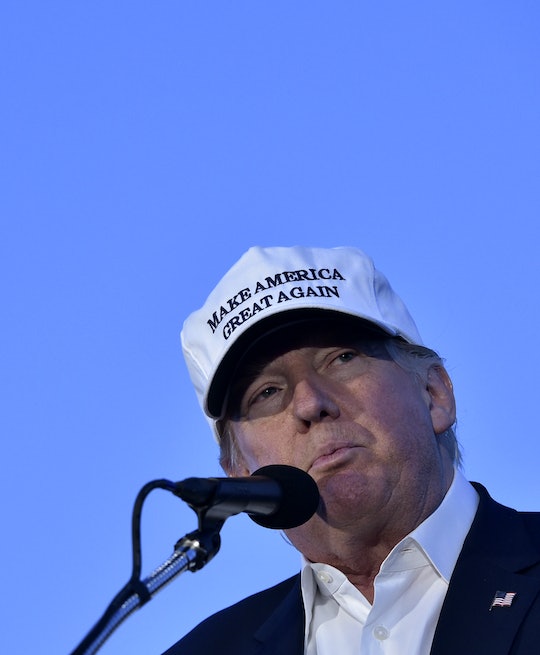 If there's one silver lining in the madness of Republican presidential nominee Donald Trump's ascendancy, it's been the amazing jokes about him on late night television. It's no surprise, then, that Jimmy Kimmel's Donald Trump jokes at the 2016 Emmys were 100 percent on point.

Kimmel's entire monologue, frankly, was a rapid-fire round of hilarity, but it didn't get much better than when Kimmel called former model Melania Trump by the affectionately insulting nickname, "Malaria." More specifically, Kimmel quipped that if it wasn't for television's love affair with Donal Trump, the business mogul wouldn't be running for president. Rather, he'd be at home, "rubbing up on Malaria while she pretends to sleep."

Zing. As it turns out, there's actually some context for that joke. Back in March, Kimmel was discussing a negative ad about Melania Trump's modeling days that had been showing in Utah prior to the primary there. During his bit, Kimmel seemed to accidentally call her "Malaria." It's unclear whether this was pre-planned or a bona fide Freudian slip, but it was funny nevertheless. Kimmel took the opportunity on tonight's stage to repeat the gaffe. Who knows, maybe the name will stick this time around. The joke is a tad immature, sure, but many felt it was OK for a good giggle.

The Melania/Malaria joke aside, the Emmys really kicked into high gear when Kimmel blamed producer Mark Burnett for creating the large-scale publicity stunt that has been Donald Trump's candidacy for president. Kimmel couldn't have been more direct about it. "Many have asked, who is to blame for Donald Trump?" Kimmel asked innocently. "And I'll tell you who, because he's sitting right there. That guy. Mark Burnett. The man who brought us Celebrity Apprentice."

The camera, of course, went right for Burnett, who laughed jovially at the attention. Kimmel didn't stop there, though. He went on,

Thanks to Mark Burnett, we don’t have to watch reality shows anymore because we're living in one. Thank you, Mark. Thank you for coming all the way from England to tear us all apart with your intricate plot. It worked. You sneaky little crumpet muncher, you. Who do you have lined up to fill the spot on the Supreme Court, Miley Cyrus, or CeeLo? I'm going on the record right now, he's responsible.

Kimmel really went for the guy. He wrapped up the monologue with quite the mental image, too: "If Donald Trump gets elected and he builds that wall, the first person we're throwing over it is Mark Burnett."

Yikes. You get the feeling Kimmel's been sitting on that one for a long time. All told, it seemed pretty clear that the Donald Trump jokes were a high point amidst a generally amazing hosting job by Jimmy Kimmel.